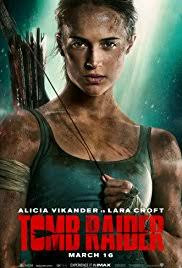 You know that thing were you get stuck on a particular part of a video game and you have to play it over and over to the point that you feel bored at its repetitiveness?
That was the experience of watching Indiana Jones and the Last Crusade Tomb Raider on the big screen.
The film begins with Indiana Jones Lara Croft showing off their reckless side by ignoring orders and authority and engaging in a high-speed chase that ends up with them getting in trouble.
Meanwhile their father has gone missing while searching for the Holy Grail secret island tomb of Himiko. After finding the father's diary secret room containing all their research, they go off in search of their dad, who may have been kidnapped by Nazis an evil organisation who want the Grail Himiko's corpse for their own nefarious ends.
Upon finding the island, Indy Lara is reunited with their father who is relieved to see them and also grateful that they have not brought the diary research with them. There follows the moment where the father expresses disbelief that they have in fact brought the materials right into the hands of the Nazis evil organisation who have now located the whereabouts of the Grail tomb which they will subsequently raid with the help of Indy Lara by threatening the life of his her father.
In order to claim the Grail Himiko, Indiana Jones Lara Croft must face three challenges including the Leap from the Lion's Head cross the Chasm of Lost Souls and The Breath of God that only the penitent man will pass pray to the Face of Himiko.
Alicia Vikander does her best as Indiana Jones Lara Croft. She is certainly more relatable and believable than Angelina Jolie as the British adventurer. Her reactions to the horrors she witnesses on the island feel real and help to build her into the character that audiences are familiar with in the games.
Sadly however she is unable to escape the Oscar curse that has struck the likes of Charlize Theron (Aeon Flux) and Halle Berry (Catwoman) and what should be a fun, exciting experience but is actually as much fun as watching someone else play a video game.