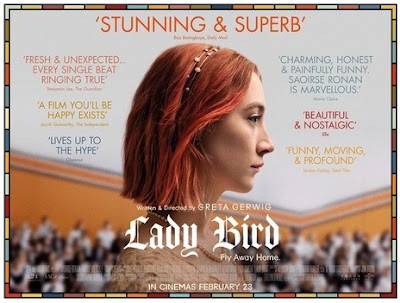 For many years, possibly unfairly, thanks to films such as Damsels In Distress, Frances Ha and Mistress America, Gerwig became synonymous as many cinemagoers idea of the a-typical New York generation X hipster who would live in an loft-style apartment in Brooklyn and be more concerned with going out and putting their dinner on Instagram than having a proper job.
However, with her debut feature film as writer-director Greta Gerwig proves that a beautiful Lady Bird is just waiting to emerge from the cocoon of the cover girl for manic, hipster pixie girls.
Being a 38 year old man from Aberdeen, Scotland, this reviewer had no idea what it would have been like for an 18 year old girl growing up in a Catholic school in Sacramento, California but having watched this honest and heartfelt coming-of-age story, they do know.
A large part of this comes from Saoirse Ronan's award worthy performance as the fiercely independent, eponymous Lady Bird and the rest from Gerwig's direction and script based partly on her own experiences of growing up in Sacramento.
The film has a truthfulness and honesty that is enhanced by the attention to detail that successfully creates a period film set in 2002 (which is incredibly depressing for this formerly young reviewer who also would know all the words to Alanis Morrisette's Jagged Little Pill album. But then again who didn't back then?).
While Lady Bird provides the wit and warmth, the real heart comes from the relationship between her and her mother Marion (Laurie Metcalf). It has an authenticity to it where you believe every interaction between whether it comes from anger or love, all tempered by the quietly calming influence of Tracy Letts as the father. In fact it is probably the best example of a cinematic parent/daughter relationship since Olive, Rosemary and Dill Penderghast in Easy A.
At one point Marion tells Lady Bird, "I just want you to be the very best version of yourself you can be" and she replies "What if this is the best version?".
Well if this is the best version of Greta Gerwig, then she certainly has a long and successful career in front of her... and not just as a t-shirt!