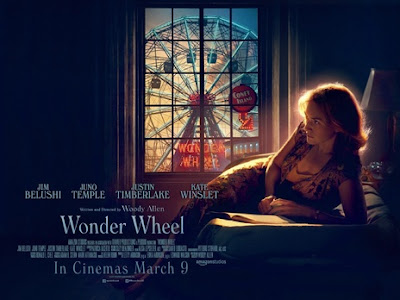 Wonder Wheel was released in cinemas this weekend but you would be forgiven for not realising that as it has had as much fanfare and publicity as an abandoned fairground.
Given the current climate within Hollywood, Woody Allen's latest film has been unceremoniously dumped into cinemas post-Oscars without as much as a trailer or poster to alert audiences to the fact.
No matter your views on Allen as a person or a filmmaker, ultimately the film should be reviewed on its merits and on that alone, it adds context to the decision to slip it out under the radar as it is not a great film at all and certainly in the lower tier of Allen's recent output.
One of the criticisms of Allen's recent work in the Noughties was that his particular brand of comedy and writing did not translate as well to locations such as Barcelona, London, Rome, etc as he went on an extended Euro Trip. His greatest films were always set in his hometown of New York City and Wonder Wheel sees him return to the Big Apple, in particular Coney Island beach.
The tale, set in the 1950s, revolves around the character of Ginny (Kate Winslet), a woman who feels she is wasting her life waitressing at a diner on the Boardwalk, raising a son obsessed with starting fires and is trapped in an unhappy marriage to a recovering alcoholic (Jim Belushi) who works the carousel at Coney Island fairground.
Her mundane life is thrown for a loop bigger than the Thunderbolt rollercoaster when she begins an affair with a young, handsome lifeguard (Timberlake) and also when her husband's 20 year old daughter (Juno Temple) returns home after going on the run from her gangster ex-husband.
If this is starting to sound like a bit like a bad American play, the kind that Joey Tribbiani from Friends would star in, then this is kind of intentional on Allen's part.
The first few scenes are set within an apartment located within the fairground (possibly a direct reference to Annie Hall which also featured a family living beneath the rollercoaster). The dialogue, acting and blocking of these scenes come across as very theatrical. As if the actors were performing a Eugene O'Neill or Tennessee Williams play.
At first it feels very odd but then the reasoning becomes apparent when it is made clear that the story is being narrated by Timberlake's lifeguard Mickey, a young man who dreams of becoming a playwright.
Only he does not have much of a career ahead of him as a wordsmith because the dialogue and plotting are incredibly stilted and on-the-nose.
Timberlake was an effective screen presence in The Social Network, but his casting here seems out of place. He has the matinee looks for a '50s dreamboat but as the Woody Allen cypher in the film, he is not a good match for the dialogue, even if it is nowhere near the calibre of Allen's early days.
In a nice reversal of one of Allen's most reviled plot devices, this movie finally sees an older woman having a romance with a younger man. Even if this romance is threatened by the younger ingenue who enters stage right and sets in motion the events that will lead to the inevitable tragic climax that must feature in an American play.
Allen's films are often the stuff of fantasy. After all, why do so many of them feature a man in his fifties romancing a girl in her twenties?
Wonder Wheel is a romanticised version of New York which features this red, amber lighting that appears on Winslet's face all of the time, no matter what time of day. A light that for some reason can appear to come from two different directions at once and only on the main characters. It is the type of light that only appears in paintings and postcards. Idealised images of a place that wishes to portray a lifestyle that it cannot live up to and this is ultimately Ginny's downfall.
Winslet is the film's saving grace as the third act comes around and her character finally embraces and revels in the drunken Streetcar Named Desire Stella-esque turn.
As for the rest of the movie, it is very similar to the ferris wheel after which Wonder Wheel is named. It might provide a momentary distraction from your daily routine but ultimately it goes nowhere and will leave you right back where you started.