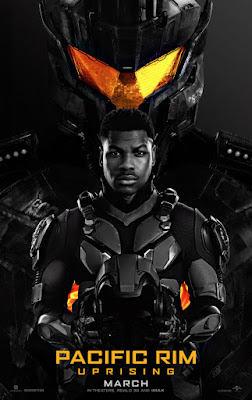 Will a film like Pacific Rim Uprising ever be judged as fine art or highbrow entertainment? No.
Does Pacific Rim Uprising deliver on its promise of giant robots fighting giant monsters? Yes. And then some!
Set 10 years after Idris Elba's Stacker Pentecost "cancelled the apocalypse", Uprising follows his son Jake (John Boyega) who is living the life of Riley. Partying all night and spending his days trading Del Toro's Oscar and stolen Jaeger tech for Sriracha hot sauce.
Fate (and the purposes of the plot) brings him into contact with a young upstart Amara Namani (played with zesty zeal by Cailee Spaeny) who has built her own mini-Jaeger. One CGI-heavy chase later and they are arrested and brought back into the Jaeger pilot programme by Jake's half-sister Mako Mori (Rinko Kukuchi returning along with Charlie Day and Burn Gorman).
Mori needs Jake's help to to keep the programme running in the face of a proposed remote drone programme but before you can say "Kaiju believe it?", evil forces have conspired to reopen the breach and giant monsters are soon rampaging through downtown Tokyo like Godzilla going for a midday stroll.
Uprising doubles down on the action in some genuinely surprising and enjoyable ways, even if they create plot holes wider than a breach in the Pacific ocean.
The main reason that the audience will go with them and keep a silly smile on their face throughout is down to lead actor (and producer) John Boyega. It is a performance that cements his position as a bona fide movie star and he could power an entire fleet of Jaegers with the power of his charisma alone..
Pacific Rim Uprising is a classic Ronseal film in that it does exactly what it says on the tin but Boyega is the Jaeger-Bomb!