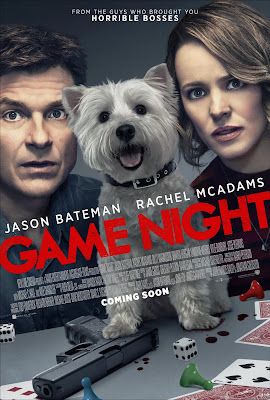 With the world getting people down at the moment, between politics and weather, sometimes audiences just need a good old-fashioned, fun Friday night movie that does not require too much brain power and does exactly what it says on the box.
In the midst of Awards season, finding such a film can sometimes feel like a Trivial Pursuit but Game Night has the Monopoly over the competition going into Oscar weekend.
Jason Bateman and Rachel McAdams play the lead characters who are ultra competitive and would normally be that really annoying couple in real life that everyone hates but have enough charm and chemistry to make them likeable.
They run a weekly game night in order to hang out with their friends; childhood sweethearts Kevin and Michelle and the dumb, without a Cluedo Ryan who brings a succession of dates who are certainly no Masterminds either.
They run each night like a military Operation in order to avoid the unwanted attention of neighbour, police officer and former gamer Gary (a scene-stealing Jesse Plemons) but their perfect Game of Life threatens to be sunk like a Battleship when, Guess Who?, Bateman's more successful older brother Brooks turns up to host a special game night involving a murder-mystery style "kidnapping"role play party where one of the guests will be taken and the others must Connect Four clues to solve the crime.
The problems begin when Brooks is kidnapped for real for getting mixed up with real criminals and they teams Scrabble around to win the game, unaware of the real Risk involved.
The film takes several fun Twisters and turns along the way and, unlike many comedies this decade, is shorter than a session of Dungeons and Dragons.
The end result is not a comedy working at the top of its game but it does just enough to pass go and collect $200.