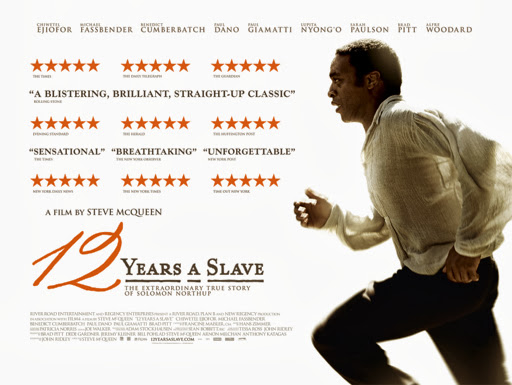 Steve McQueen has never been afraid of making films about difficult subjects, such as the 1981 Irish Hunger Strike in Hunger or sex addiction in Shame.

Here he tackles the true story of Solomon Northup, a free black man who was separated from his family, kidnapped and sold into slavery. He is forced to suffer all manner of cruelty and indignities, all the while clinging to the hope that freedom will be regained.

Django Unchained this is not. There is no light relief, no moments of respite from the bleakness of the situation. The only exploitation here is that of the African-Americans like Northup.

Slavery is an ugly part of history, one that people would like to forget but this film makes the audience confront it head on.

Sean Bobbit's camera is unflinching. Where the instinct is to turn away from a brutal flogging, our view is focused on the flesh being torn from the back of a slave. As Northup is hung by a tree, toes barely touching the ground, gasping for breath, the camera remains fixed on him as life on the plantation goes on as normal.

Yet the cold gaze of commitment to the truth comes at a cost.

There is a sense of distance and detachment from the central character. The audience witnesses Solomon's struggle, yet never really learn too much about him.
Given the advice "to say and do as little as possible", Ejiofor's Northup is a masterclass in restraint and subtlety. The only times the anger and injustice felt inside manifest results in violence, sadly normally to himself or other slaves.
Keeping it all bottled up throughout the film, allows for the heartfelt emotional payoff at the end of the film when "freedom is opportune".

Due to his quiet nature Ejiofor is at times overshadowed, presumably intentionally, by the his owners/abusers.

Fassbender's Edwin Epps is a drunk, abusive, bible-ranting cotton farmer. He could easily have been the Calvin Candie of the film but fills his character with an air of self-loathing, a conflicting tenderness towards favoured slave Patsey that turns him away from the cartoonish to the chillingly real.

It could be argued that his malicious wife (played by Sarah Paulson), overseer Tibaults (Paul Dano) and Giamatti's slave trader are even more repellent.
Benedict Cumberbatch is Northup's first owner, showing him kindness and respect, but is just as guilty as the rest for taking part in the trade.

Guilt is one of the many feelings that will be felt during the film, along with horror, disgust, etc. Not an easy film to watch, 12 Years A Slave is an extremely important and powerful piece of filmmaking that is easy to admire, impossible to ignore but ultimately difficult to love.