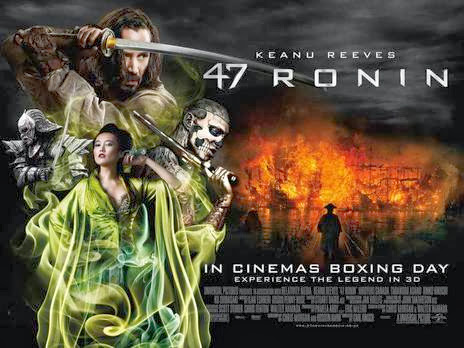 Watching 47 Ronin, it was difficult to work out the target market for this film.
Here is a movie financed by the US, filmed in Japan, using Japanese actors, speaking English, combining ancient tradition with mystical sorcery, wrapped up in poor CGI and muddy 3D... featuring Keanu Reeves.
It is hard to see US audiences taking to it (Looking at the box office numbers, they didn't) and unless they did an alternate version with the Japanese cast speaking their native language, it wouldn't play all that well in Japan either.
It wasn't until the end that it became clear that this was apparently inspired by a real life legend of the 47 Ronin and in retrospect, it feels like someone was trying to turn it into a Japanese version of 300.
Taking a similar "based on" approach to allow for the insertion of more fantastical elements like a shape-shifting witch and demon warriors who live in the strange tree from Dagobah.
The way of the samurai is a very serious, honourable way of life and the overall tone of the film is deadly serious tone so elements like the ones mentioned or a potentially fun trip to the set of the latest Pirates Of The Caribbean feel out of place as no one is willing to embrace or even acknowledge the ridiculous. Not even Keanu who you half expect to whisper "Woah" when a witch transforms into a dragon, although Rinko Kikuchi as said witch is the closest to having any "fun".
With actors who have appeared in such films as Zatoichi, The Last Samurai and The Matrix, the fight scenes could have been the film's redeeming feature yet sadly the editing is too quick to do justice to the final showdown which replicates the third act of Robin Hood: Prince Of Thieves.
What also doesn't help is the lack of characterisation for the 47 Ronin. There is the leader Oishi (Hiroyuki Sanada), halfbreed Kai (Reeves), the son, the dishonourable one, the fat one and 42 unnamed others and as such there is not the same kind of empathy for them as there is in Seven Samurai or 13 Assassins where each character gets a specific trait or moment to shine.
My advice would be to give this a miss and rent something like the aforementioned samurai films or Hero, House Of Flying Daggers instead, even 300 which in terms of budget shows a much better spend per head ratio: $216666 per Spartan compared to $3.72 million per Ronin!