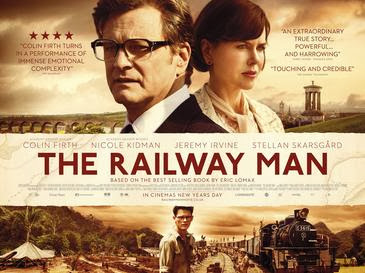 Thanks to series of delays and changed trains, railway enthusiast Eric Lomax (Firth) meets Patricia Wallace (Kidman) by chance on the journey from Crewe to Carstairs. He's on his way home to Berwick-Upon-Tweed, she's off for a tour of the Highlands.

Before you can say Brief Encounter, he uses his timetable to meet her at Edinburgh Waverley and a whirlwind romance begins resulting in their marriage.

On their wedding night, Eric suffers a panic attack at the memory of a past trauma. Unable to get through to her increasingly distant and fragile husband, Patsy sets out to find out the root of the tracks of his tears by speaking with former war buddy Finlay (Skarsgard).

Through flashbacks, the truth is revealed that both men were POWs in WWII and forced to work on the railway the Japanese were building in Burma. Young Lomax (here played commendably by Jeremy Irvine) is subjected to further unknown tortures at the hands of a Japanese soldier called Nagese.

This is not a film where "love" is the thing that offers redemption. This is a film about honour and the knowledge that for some, the war is never over. What they have to decide is whether they live for revenge or forgiveness.

This dilemma is at the heart of the film's third act (and best section), when Lomax returns to Burma to confront his captor after he discovers that he works at a museum dedicated to the railway.

Kidman is given little to do for two thirds of the film as the love story is sidelined for the war plot line and Firth doesn't really come into his own until the final showdown with Nagese.

The grown-up Nagese is played by Hiroyuki Sanada, who appears in just about every US/UK film set in Japan or in need of a Japanese character (Sunshine, The Last Samurai, The Wolverine, 47 Ronin). He takes a character who is initially portrayed rather one-dimensionally and develops him into a real person who has also been scarred and changed by the events of the war. The one-on-one confrontations with Firth are the most emotionally charged and moving of the film.

Watching this film in the cinema is rather like a train journey. You initially balk at the ticket price, the refreshments are daylight robbery, the progression is a little stop/start with a feeling like "are we ever going to get there" but ultimately it gets you to your destination and the resulting emotion is enough to forgive any issues you may have had.