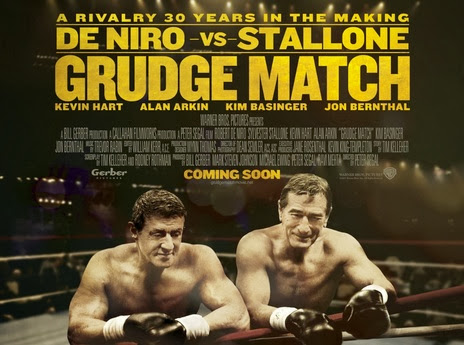 We've all had those arguments as film fans where we discuss who would win in a fight: an Alien or a Predator, Superman or Incredible Hulk, etc.

In most cases (AVP aside), these debates remain an unquantifiable fantasy yet the makers of Grudge Match have decided to answer the question that not many film fans would have been asking... who would win in a fight between an old Rocky Balboa and an old Jake La Motta?

To quote the tagline from that other cinematic showdown Alien vs Predator, "Whoever wins. We lose."

Before we can shout "Sly, get in the ring already. Bobby De Niro's waiting" and find out who wins, you have to first sit through 100 minutes of badly CGI'd young versions of Sly and Bob, lots of jokes about old people, poor spoofs on the training montages, desperate reconnections with old girlfriends and a son who calls himself BJ.

Yes, that is correct. A guy named Bradley James (played by Jon Berthnal) actively calls himself BJ. Cue lots of jokes and sniggering plus an inability to take the character seriously.

The fight footage is not bad, with it looking like both actors did a fair amount of the actual work, which saves it from a technical knock out but if this was a proper boxing match, someone would have thrown in the towel by now.