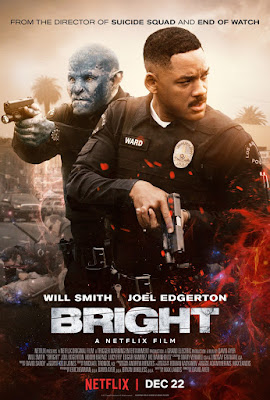 In my first big change for review writing for 2018, it is time to recognise streaming services original content as part of the film release calendar and review them accordingly.
After all last year brought the likes of the excellent Gerald's Game, Cannes Film Festival competitor Okja and Amazon Studios Oscar-winning Manchester By The Sea.
Following on from the Oscar-nominated Mudbound, December brought Netflix's most expensive original production Bright, at a cool $90 million. Although this has now been surpassed by Scorsese's The Irishman at a budget of $100 million.
It wouldn't have been a Netflix original release with a little bit of controversy and Bright dutifully supplied it. Many critics called it one of the worst films of 2017 and Netflix fired back claiming it was their most popular original release with 11 million views in its first three days.
While its true that 11 million views on Netflix, which is a paid subscription, is not equal to 11 million people paying $15 to watch a film in a cinema during its opening weekend, it was certainly enough for Netflix to greenlight a sequel. Clearly they are banking on a large percentage of those views being people who enjoyed it and not just clicking on it to see if it was as bad as the reviews made out.
This reviewer was certainly in the latter category to begin with but it is not anywhere near as bad as 2017 films such as Transformers: The Last Knight and The Snowman.
Just like Ayer's Suicide Squad, this is a case of poor execution and wasted potential. For there is something at the heart of Bright that could have made for a great limited series with a new spin on the procedural detective/mismatched buddy cop drama.
Instead the result is an End of Watch retread with two police partners forced to work through their own issues with each other whilst trying to stop the end of the world... Oh, that's right, Bright is set in a world where Humans, Orcs and Elves live side by side.
Imagine if Lord Of The Rings had ended with Sauron being destroyed and all the different armies called an uneasy truce until the modern day.
The film begins with very little in the way of world building, instead focusing on Will Smith's police officer returning to duty after being shot while on duty with the very first Orc police officer Nick Jacoby (played with humour and pathos by Joel Edgerton). The rest of the department want Jacoby gone because he doesn't fit in, and before you say it, yes it does feel very similar to the plot of Zootropolis at this point.
There are bigoted fellow cops and underhanded schemes to frame the Orc but before you can say Internal Affairs, the two partners are called to a disturbance where they discover the one ring that will rule them all... wait, no, they find a magic wand which is wanted by every single criminal in the city and it turns into a fight to survive the night.
From here it is a very generic, straight up action film that lacks the wit and charm needed to sell the more ridiculous aspects of the story. For example, at no point does Will Smith witness something crazy and shout "Awwww hell no!". Missed opportunities!
There remains untapped potential that could turn the sequel into something special but Bright is sadly a dim and dull affair with the risk that as it is on Netflix, audiences may not get to the end of their watch.