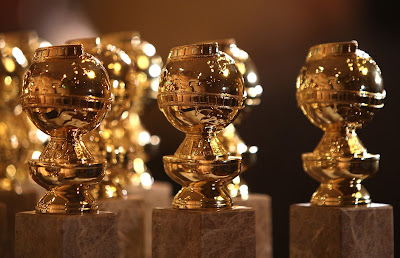 The Golden Globes are this Sunday and it is time for my annual attempt at predicting the winners. This year more than any will be difficult to do as the majority of the films have not yet received a UK release, which means that I will have to rely on guess work rather than actual opinion in most cases... although public opinion and critics views often can amount to nothing when it comes to the Globes!

Expect the ceremony and speeches to be more important and talked about than the actual results.


The Post is the most topical film but The Shape Of The Water is the most nominated film on the night so my vote goes to Del Toro's unconventional love story.


The Globe will come down to two of the best reviewed films Lady Bird and Get Out. Get Out is "The Martian" of the category and this could tip the odds in its favour so expect it to win on the night.


Hawkins is the front runner on paper but expect McDormand's foulmouthed tour-de-force performance to scoop the gong.


Dames Mirren and Dench don't stand a chance but receive their obligatory nominations anyway. The odds are in favour of Saiorse Ronan but I have a feeling Margot Robbie will sweep in with a crowbar and take the victory from under Ronan's feet.

Best Actor - Drama
I could see the Globes giving the award to Day-Lewis as a glorious farewell, if the rumours of retirement are true, but the money seems to be on Oldman's cigar and scenery-chewing turn as Churchill which wins the bonus points of playing a real life person.


Can't see anyone but Franco taking this one due to his total commitment of transforming into Tommy Wiseau.


Given the current political climate in Hollywood, it would be tempting for them to award Ridley Scott for managing to recast and reshoot Spacey's role in just a few weeks before release, but I think that Del Toro will take the prize.


I haven't seen any of these films so going to have to go with the popular opinion on this one with Laurie Metcalf in Lady Bird but Janney could run her close from what I have seen in the trailers for I, Tonya.

This is a year where Dafoe, Rockwell or Hammer could easily win and be worthy winners but I can't see anyone but Plummer winning due to the incredible story that goes with his late replacement taking over from Spacey.

Best Screenplay
Not surprised to see Sorkin nominated but McDonagh's scripts are always incredibly quotable so Three Billboards will win One Globe.

Best Foreign Language Film
Having not seen any of the nominated films, picking the winner of the Palme D'Or The Square.

Best Animated Film
Going for a punt with Loving Vincent. Not your traditional nominee but would be a worthy winner.
Posted by Dallas King at 12:49

Email ThisBlogThis!Share to TwitterShare to FacebookShare to Pinterest
Labels: call me by your name, dunkirk, get out, Golden Globe, lady bird, Nominations, Oscar, the greatest showman, the post, the shape of water, three billboards