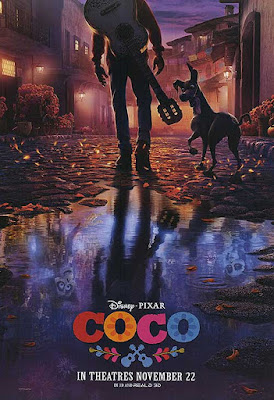 The arrival of a new Pixar film is usually something to look forward to. After all, this is the studio that brought us Toy Story, Finding Nemo, The Incredibles and Up. This is a studio that brought us incredible and original ideas like "What if your toys could talk?", a movie from the perspective of your emotions or a silent film starring a robot left on earth to clear up garbage. We'll just skip over Cars for now...
So why was it that Coco did not seem to be generating the same level of Joy in this Pixar fan's mind? Why didn't Coco Pop?!
On paper, it ticked all the boxes: Gorgeous animation, excellent voice cast, Pixar easter eggs plus the ability to tug on the heartstrings in a way only Pixar can.
Yet the end result left me rather dead inside. Just like the deceased members of Miguel's family I guess.
The story revolves around young Miguel. Born into a family who make shoes and have banned music due to a family tragedy, yet something deep inside him yearns to play the guitar.
A shocking discovery on the Day of the Dead leads to a fight with his family, a curse that transports him to the Land of the Dead and a quest to find his great, great, great Grandfather Ernesto De La Cruz, the greatest singer in all of Mexico.
The film plays on the importance of family and memory. Particularly the use that music can have in stimulating memory. In fact, there is a lot of work being done in this area in real life with dementia sufferers.
It also encourages us to keep the memories of those who we have loved and lost in our hearts and minds so they are never forgotten. It is this that forms the emotional core of the film and slowly the film turns on its head and the reason the film is called Coco, rather than Miguel, comes to the fore.
The problem was that with all the talk of memories and the trailer's claim to explore a world you've never seen before, it brought flooding back the memories of the 2014 film The Book of Life, produced by Guillermo Del Toro which featured a love story set in both the land of the living and of the dead and was a superior film to Coco.
It is difficult to be too critical of Coco however because despite its lack of originality, one cannot fault it's execution as come the final scenes, Pixar had once again worked its magic and despite my general feelings of indifference, managed to tug on the right guitar strings to feel a twang of emotion.

NB: Note that there is no Pixar short in front of the feature due to the selected short Olaf's Frozen Adventure being pulled from the US prints due to length, confusion and quality. Instead it played in front of special Christmas screenings of Frozen here in the UK.