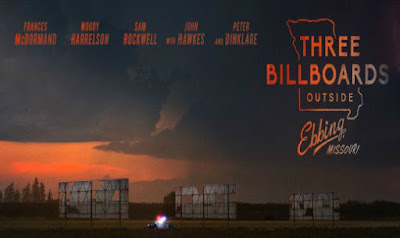 In Three Billboards Outside Ebbing, Missouri, everyone in Ebbing has an opinion on the titular billboards erected by Mildred Hayes, never mind if they have actually seen them or not.
The same can be said for the film itself. Arriving in UK cinemas on the crest of a wave that includes 4 Golden Globes, 9 BAFTA nominations, expected Oscar nominations and posters and billboards with these facts plastered all over them, it is difficult to go into the movie without some preconceptions.
Thankfully this is one film that lives up to the (most of) the hype and still has plenty of surprises as the much of the plot has not been given away by the trailers (although many of the best lines have).
The trailer paints the film as a dark, acerbic comedy in the mould of In Bruges however it is more of a drama with darkly comic lines in it. Both deal with grief and loss but this is much darker material. And yes I know In Bruges dealt with an assassin who killed a kid.
The three billboards erected by Mildred Hayes, criticising the lack of arrests in the case of her daughter's murder, puts her on a direct collision course with two of the town's police officers cool, calm and collected Chief Willoughby and hot-headed, impestuous and racist Lt. Dixon.
These towering billboards are met by three equally towering performances from Frances McDormand, Woody Harrelson and Sam Rockwell, each deserving of a billboard of their own singing their praises and of the award nominations that have met them along the way.
McDonagh's scripts, much like his plays, can produce dialogue that can become endlessly quotable but also a weapon in the right hands, capable of wounding and destroying a character with a single line.
In Bruges proved this with Ralph Fiennes, who up to that point had rarely done comedy on screen, and showed Colin Farrell to be a terrific actor given the right material.
All three leads in this film are more than a match for the material and deliver it with venomous aplomb.
The majority of the praise will deservedly go to McDormand who is in career best form as a mother consumed by grief, regret and rage. They say "Hell hath no fury like a woman scorned" and no one is safe from the billowing rage that takes hold of Hayes. Even those kind souls who try to help her like Peter Dinklage's James.
Harrelson plays against type, both for what we expect a Southern cop to be and also what we would expect from Harrelson's back catalogue of characters. The result is a moving, compassionate performance of a man desperately trying to do the right thing by everybody.
Compassion is a word that certainly cannot be used when describing Sam Rockwell's Officer Dixon. A complicated and unpleasant individual, he should not be deserving of any sympathy or empathy yet it is down to the skill of Rockwell that he can elicit these feelings from the audience as the film progresses, despite their initial resistance.
For the film certainly does not take the easy way out. It will challenge the characters and the audience, taking several intriguing and unexpected turns down the road.
McDonagh is not interested in spoon feeding the audience and giving them the easy answers they seek.
Because at the heart of the story, it is not about redemption or closure but the futility and impotence of rage. Everyone is raging against something but ultimately they must ask themselves if it helps solve anything. Or as one character sagely puts it does "Anger just begets anger".
The film is not without its flaws. Abbie Cornish's character is given short shrift and there is one of the worst uses of CGI you are likely to see in a mainstream movie this year.
This is offset however by the biggest crime in the film which is attempted theft by Samara Weaving who threatens to steal the entire film in just two scenes.
Three Billboards is a terrific film that proves Martin McDonagh has found his groove again following the missteps taken in Seven Psychopaths and is likely to follow the success of the Golden Globes with a BAFTA or Oscar or two. After all "Awards just begets Awards".