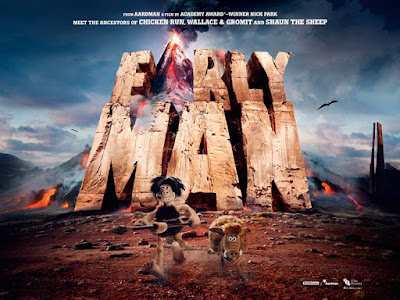 One minute into Nick Park's new Aardman animation Early Man, a meteor hits the Earth killing off the dinosaurs yet leaving cavemen alive and miraculously unharmed with a football shaped meteorite to covet and play games with.
Not only does that meteor wipe out two dinosaurs (revealed in the end credits to be called Ray and Harry, in one of the film's few deft touches) but any chances of a fish-out-of-water storyline where a Stone Age Caveman must struggle to interact with the dawning of a new Bronze Age are also gone in sixty seconds.
For Early Man is actually nothing more than a prehistoric tribute to the Beautiful Game. It's no coincidence that the film lasts 90 minutes, the same length as a match.
Even if the takeaway from the first couple of minutes could be that the only people interested in football are neanderthals, it is clear that Park has an affection for football. One can even deduce his favourite team is probably Arsenal given that the characters who is the most proficient at the sport is called Goona.
There was certainly huge potential here. The primitive Stone Age vs the wealth of the Bronze Age in a match for the valley? It's an underdog story as strong as Leicester City's in the Premiership.
An early scene in the Bronze Age market with shops like Flint Eastwood and food stalls like Jurassic Pork showcased gags are sharp as flint and potential for jokes about the early men adapting to this new age but they are shown the red card in a game of two halves in favour of tropes such as training montages and bad sports puns as tired and old as the savages playing the game.
Talented voices like Tom Hiddleston (doing his best French Knight from Monty Python and the Holy Grail) give it their best shot but they are in a league of their own and let down by a script that is second division at best.
Aardman had a open goal in front of them. Instead Early Man is sent for an early bath!