The Shape Of Water - review 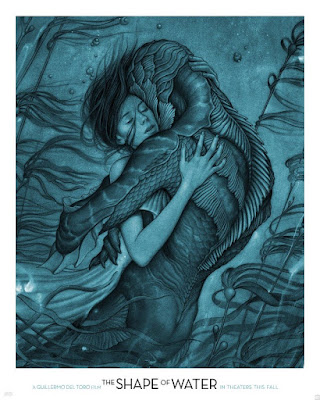 The Shape Of Water arrives on our shores riding the crest of a wave, buoyed by two Golden Globes, 12 BAFTA nominations and 13 Oscar nominations. But does the film sink or swim under the high expectations of all that praise?
Thankfully Guillermo Del Toro's film exceeds all expectations and simply put; is one of the most beautiful, stunning, moving fairy tales ever to grace the silver screen and it is deserving of so many superlatives that, just as the lead character, one struggles to find the words to describe how fantastic it truly is.
Del Toro is a filmmaker who has made his career by taking the monstrous and macabre and finding the beauty and humanity that lies beneath the horrific exterior e.g. Pan in Pan's Labyrinth, Hellboy and Jessica Chastain in Crimson Peak.
Often switching between Spanish and English language features (Cronos, The Devil's Backbone to Blade II and Pacific Rim), Del Toro's unique style of visual storytelling can transcend the barriers of language. Pan's Labyrinth remains one of the biggest foreign language films ever to screen in the UK and with The Shape of Water, he proves that the power of language and speech is no barrier to love.
Set in the early 60's, Richard Jenkins's illustrator narrates to the audience a story of a mute woman who falls in love with an aquatic man while working in a top secret government facility.
In some ways, the film feels like it could have been the inspiration for the Creature From The Black Lagoon. In fact, the shadowy government agent played with a menacing relish by Michael Shannon says that they captured it from the Amazon, the same location as the original monster.
The production design of the creature is simply incredible and such a delight to see that it is (practically) all practical effects. Del Toro's lucky charm Doug Jones once again brings the film's beast to life opposite the beauty of Hawkins' Eliza.
The setting of the 60's is no accident, for this adult fairy tale is a story is about love and acceptance.
The four main characters of Eliza, Giles, Zelda and Hoffstetler all have to put up with rejection and persecution due to their disability, sexuality, race and nationality (most often at the hands of the real monster of the piece Shannon's Strickland).  All of them, through their interactions with the creature will ultimately learn to accept who they are and stand up for what they believe in, no matter what the cost.
There is not a single fish out of water when it comes to the performances. Hawkins and Jones have a wonderful chemistry together. Jenkins brings a touching gravitas as only he can to the lovelorn, fatherly figure of Giles and Stuhlbarg makes it a hat trick of Oscar nominated films between this, The Post and Call Me By Your Name.
Just as those two films perfectly captured the era they took place in, Paul Austenberry's production design is simply spectacular. Combined with the cinematography and art direction, it gives the whole thing the look and feel of a Douglas Sirk film or another recent movie about forbidden romance, Carol.
The love story here is just as passionate and sensual as that one and is certainly for adults only. But then what fairy tale, at its heart is not about sexual awakening?
This is one fairy tale that is anything but Grimm and can look forward to a fairy tale ending when it makes a splash at the Oscars.