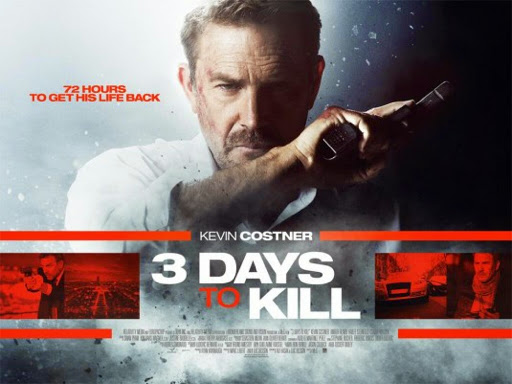 If they had they would know that there is no such thing as "one last job", for just like Michael Corleone "just when I thought I was out they pull me in".

One of the frequent criticisms of modern movie trailers is that they give too much away but another, perhaps even greater, sin is when a film is completely mis-sold by its trailer, usually to its detriment.

This is one of those cases.

Watch the trailer and you be forgiven for thinking that this was a film where CIA operative Kevin Costner wants to quit to spend time with his family but is poisoned and is given 3 Days To Kill a list of people in order to secure the antidote.

Succumbing to illness on a mission which leads to the escape of a target, Costner is diagnosed with terminal brain cancer, given 5 months to live and future endeavoured by the CIA.
Returning to Paris to reconnect with his family, he is recruited by a shadowy agent played by Amber Heard to kill the target he missed in exchange for an experimental drug that could help prolong his life.

That is quite different no?

At first glance this looks to be another case of Taken syndrome where an ageing actor decides that instead of cashing in his pension, he cashes a pay check in order to reinvent himself as an action hero.

Even though it is written and produced by Luc Besson, it never really captures that feeling, despite another strong father-daughter relationship.

The action scenes are few and far between (and all of them feature in the trailer) and actually the film is more akin to Besson's Leon.

There are nice touches in the movie, with Costner returning home to find a group of African squatters in his flat yet unable to evict them due to the law and a relationship develops between them.

There was potential for quite an interesting take on this type of story, especially due to strong performances from Costner and Steinfeld, however an inability to decide what kind of film it wants to be, unnecessarily long running time and bland, uninvolving direction by McG (I find it interesting his name was kept off all the publicity materials) resulting in a bit of a misfire.

Despite mentioning the title in the film (always deserving of a cheer), the urgency behind the 3 Days To Kill is never felt and therefore ends up being a film that few will be Taken with.