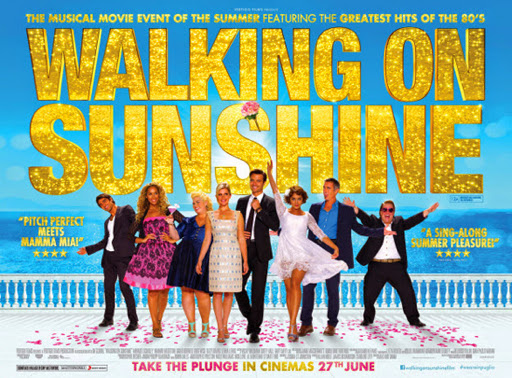 Walking On Sunshine has the distinction of having by far and away the worst trailer I have seen this year. I was absolutely shocked and stunned into silence at the moment halfway through when they started singing.

It felt like a sketch from a bad British comedy show that was taking the piss out of the current trend of jukebox musicals and the majority of the film's runtime was spent trying to work out if this was the filmmakers intentions. *Spoiler - I don't think it was*

Clearly modelled on Mamma Mia, right down to the poster, the script must have taken less time to write than this review which sees Hannah Arterton return to Puglia, Italy (the site of her one big holiday romance) upon graduation to see her sister, only to find out (feigned shock and horror) that she is engaged to her ex!

After writing this brief outline on the back of some used toilet roll, the screenwriter then spent a further ten minutes flicking through a couple of Eighties compilations to flesh out the rest.

Hmm, my characters are getting married... White Wedding by Billy Idol, sorted. Girl on holiday... Holiday by Madonna, perfect. Girls just wanting to have fun on a hen night... Well you get the idea don't you.

The "singing", if it can even be called that, is so bad that you wish Simon Cowell would appear to put his hand up to stop the performance early amid a hail of criticism. Honestly, you have heard better vocal performances on a drunken night of karaoke.

The most depressing thing about it is that the cast actually has a very talented singer among them in the form of X Factor winner Leona Lewis but she is denied a solo number, instead being sidelined in ensemble numbers for the likes of Katy Brand and Greg Wise, a man whose singing talents make Pierce Brosnan look like Pavarotti.

You see holiday resorts like Kavos and Magaluf and the hell they must go through with the Club 18-30 groups but I imagine Puglia would have preferred scores of vomiting teenagers than spending the summer season being invaded by an army of musical theatre types going through poorly choreographed song and dance numbers.

A musical where the performances are as much an assault on the eyes and ears as the fashion was during the Eighties. It hits so many bum notes that you would be best to stick in some earplugs, get some sleep and ask someone to Wake You Up Before They Go Go.