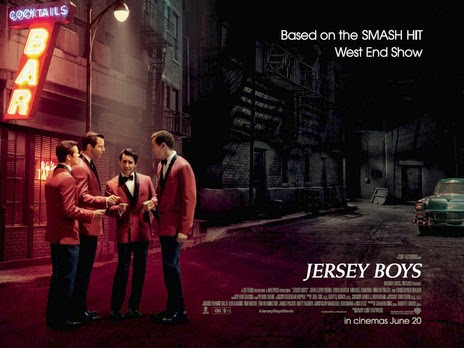 When is a musical not a musical? When it's the film adaptation of Jersey Boys.

Disclaimer: I have not seen the stage musical Jersey Boys so am unaware of how it works on stage but in the movie version there is a distinct lack of traditional musical song and dance numbers but instead performances of their hit songs with occasionally band members talking directly to the audience.

The only time that it even approaches something like the energy and spectacle that a musical should deliver is during the end credit sequence where the entire cast perform the most famous song Oh What A Night.

Before that, Eastwood delivers a film that desperately wants to be Jersey Fellas, showcasing the group's history growing up in Jersey with their connections to mobsters played by Christopher Walken and the real life Joe Pesci.

Yes, I am poor on my music knowledge and genuinely had no idea that Joe Pesci knew the group and now realise where his name Tommy Devito in Goodfellas comes from. Also I was not aware that he was the first to record Can't Take My Eyes Off Of You.

With all the aspirations to Goodfellas; the to-camera narration, a "funny how?" reference, the further it goes with the Marty comparisons, the more the film cries out to have been directed by Scorsese.

Clint's delivery could be described Frankie Valli and the Four Seasons In One Day and boy does it feel like it. The film is so slow that it could have done with the energy and ferocity that Scorsese brought to The Wolf Of Wall Street, which felt like a 90 minute picture in comparison.

Next up for Clint and main star John Lloyd Young will surely be the Chris De Burgh story given the make up job at the end of the film.

If I had to describe the movie by using one of their songs? Oh What A Shite!

P.S. Is it wrong that when hearing the song Big Girls Don't Cry I automatically think it will be going into Wipeout for the Dirty Dancing Megamix?