A Million Ways To Die In The West - review 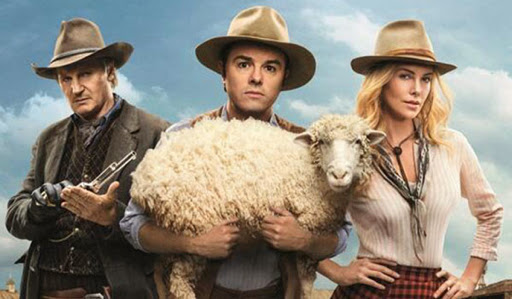 In A Million Ways To Die In The West, Seth McFarlane's character Albert Stack is constantly going on about how much he hates the West.

By the end of this 116 minute so-called "comedy", I could probably have listed a million reasons to hate this film.

The Old West is a barren, deserted place. Almost as barren as this screenplay is of jokes and punchlines.

Whereas an episode of Family Guy or American Dad can survive the odd humour-based misfire due the frequency of the gags over a short 20 minute runtime, here Seth McFarlane is as alone and exposed as he is during the shoot outs he frequently finds himself in... and his jokes hit as wide of the mark as his bullets, although often he's just firing blanks.

In between all the humour tumbleweeds blowing through the film there is some beautiful vista shots of the West in the opening credit sequence, some truly bizarre cameos (In particular The Cowboy At The Fair and one that raises a smile yet makes no sense whatsoever given the film it comes from) and a mildly catchy song about the benefits of having a moustache.

But even having a moustache won't save you from contemplating a million different ways to die in order to save yourself from watching another minute of this manure... and I hate manure!