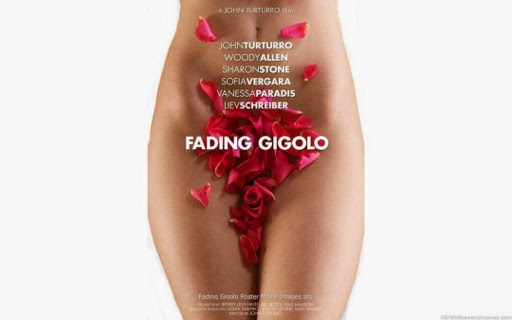 Watching Fading Gigolo in many ways was similar to the experience of being with a gigolo or escort.

Having decided to experience it, possibly read some online reviews to help you make up your mind, agree on a time and place, there is the exchange of money, you sit back in the dark nervously unsure of what to expect and when it's over you are left with that mixture of dissatisfaction and shame at what you've both done.

Three Six Mafia once said "It's hard out here for a Pimp" and Woody Allen finds that is is exactly that when he is brought in front of a court of Rabbis for potentially corrupting the widow of a Hassidic Jew in a weird scene that I was unsure if it was meant to be a Coen-esque comic oddity or deadly serious.

It is as if writer-director John Turturro's gigolo has been asked to act like a cross between a Woody Allen film and a Coen Brothers movie and he sadly suffers from performance issues and the result is a bit of a flop.

One of the main issues with the film is the lack of explanation and motivation in the two main characters.

Woody Allen (playing Woody Allen and the highlight of the film) is having to sell his antique bookstore and persuades his florist-plumber friend Fioravante (John Turturro) to become a male escort in order to make extra cash which they will split.

Allen lives with an African-American women and her large family of children but the nature of their relationship is never discussed. Likewise Fioravante is apparently strapped for cash but seems to live in a nice apartment, is constantly referred to as a plumber but never does any (unless it is a euphemism and the only pipes he cleans are lonely women's) and just seems to accept becoming a "ho" without any real fight or reason.

The only real honest characters are his clients, in particular Sharon Stone's unhappily married dermatologist and Vanessa Paradis's widow.

There is an obstacle to Fioravante's relationship with Avrigal that involves Liev Schreiber's Orthodox Security Cop which delivers the film's most implausible plot development.

Sadly this is one gigolo that certainly isn't worth paying for.