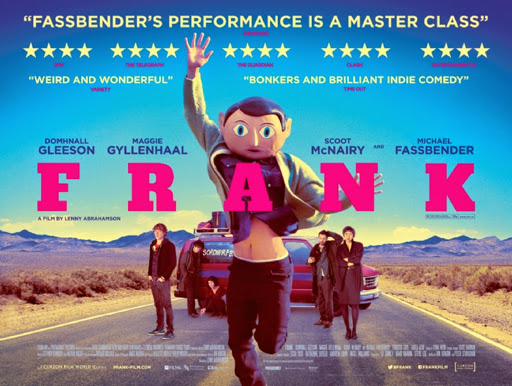 Let's be frank. This is not the Frank Sidebottom story.

Based on Jon Ronson's time spent as the keyboard player for Frank Sidebottom, this is a scathing satirical look at the music industry as seen through the eyes of Jon Burroughs who joins the band Soronpfrbs with enigmatic frontman Frank and a keyboard player problem as big as Spinal Tap's drummer crisis.

It ask questions about creative integrity versus commercial popularity, the role that social media has to play in generating success, the point between genius and madness and, of course, about masks.

I know "everybody wears a mask" but that is more metaphorical. Frank literally wears a mask and never takes it off, not even in the shower.

Given the cult of celebrity these days and programs like X Factor where we know every single detail about the acts before they've even sung a note, is it important for a band to keep an air of mystique in this fickle business.

It is the mystery of the man behind the mask that draws Jon (Domhnall Gleeson) into his world, along with those who find out about the band through Jon's social media posts.

When the band get a high-profile gig at SXSW, the cracks begin to show as the struggle between remaining true to what they are and becoming "likeable" threatens to fracture the band and Frank's mental state.

Fassbender manages to create a character that will make you laugh and cry without ever seeing his face, although he occasionally informs us of his emotions e.g. "Non-threatening grin".

Much like the esoteric sound that the eponymous Frank and his band are trying to make, there will be some people who find something special within this film and there will be others, like me, where the music falls on deaf ears.

Frankly my dear, I didn't give a damn.