The Trip To Italy - review 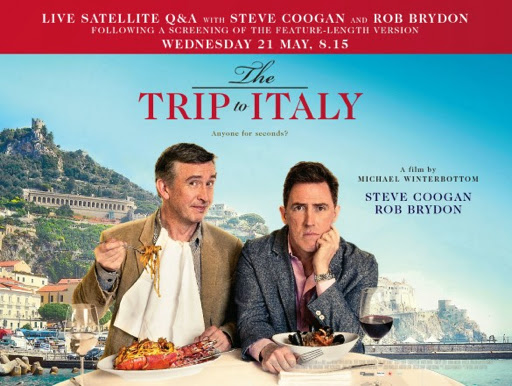 Normally when television shows make the decision to transfer to the big screen, the result is something that ends up unfavourably compared to (or even missing the entire point of) the original like Charlie's Angels, Bewitched, The Dukes of Hazzard for example.

There can be the odd exception to the rule (21 Jump Street and Serenity) but The Trip To Italy is a rather unique case.

Like the The Trip, which saw slightly fictionalised versions of Steve Coogan and Rob Brydon go on a tour of restaurants in the north of England to write a column for the Observer, it was released as a six part series in the UK but edited down to a feature-length film for all other territories including America.

The resulting film, viewed in the UK after watching the entire series, is somewhat of an oddity.

The running time of 100 minutes rather than 180 minutes means that a lot of material is cut out but there is still a clear narrative going through the story which this time follows Rob's character as his strained family relationship and burgeoning career become at odds with each other.

It only takes 5 minutes of them being in Italy driving around in a Mini to unleash "You're only supposed to blow the bloody doors off!" but while there is a risk that the jokes could become repetitive and stale, the jokes the impressions are built around (Christian Bale and Tom Hardy being unable to understand each other on the set of Batman, Brydon criticising Coogan's career as Parkinson and Coogan lamenting Brydon for being unable to audition for a Michael Mann film without doing a Pacino impression) generate enough laughs to keep the momentum going and advance the story and their relationship.

It would be nice to see the two take another trip together in a few years to see where the characters are then, rounding off their journey in a Before Midnight-style trilogy.

If I was to describe the film in terms of a restaurant review, it would be beautifully presented, a subtle blend of sweet and sharp with an underlying acidity that complements the occasionally light and frothy exterior and leaves you wishing there were a few more courses.