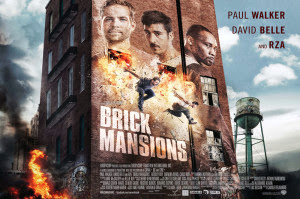 We've all experienced that feeling of déjà vu when watching a movie in the cinema where you recognise something that has been copied, referenced or homaged to from another film.

However with the sheer number of remakes happening in Hollywood right now, it is impossible to keep track of them all.

It wasn't until around 30 minutes into Brick Mansions that the déjà vu feeling of "that's like that parkour bit from District B13" turned into "wait, this IS just a remake of District B13".

So around 10 years after the initial parkour craze crossed over into the cinematic mainstream with Casino Royale and the original District B13, that film's star, and one of the pioneers of parkour, David Belle plays the same role in this US version of the story albeit one that has been dubbed over by another actor (which IMDB claims to be Vin Diesel in some sort of weird final Fast & Furious link up).

This version is set in Detroit, who must be annoyed with films like this and Robocop constantly going on about how it is the most violent city in the USA, where Brick Mansions is a ghetto project that is walled up by the city to control crime and prevent it getting into the rest of the city.

Sent into the district to find and diffuse a nuclear device that has gone missing, Paul Walker displays the blue eyed charisma of the dogged undercover cop that became his forte in the Fast & Furious franchise but thankfully with the 7th film still to come next year, this film won't be his final cinematic appearance.

Unoriginal and uninspired writing, action sequences and bad CGI are the poor quality foundations on which Brick Mansions has been built and leave it in a bigger risk of collapse then Red Road.