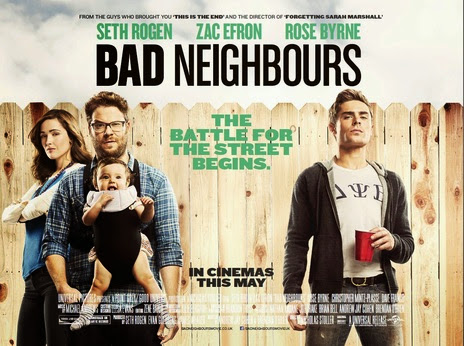 Unfortunately for new parents Seth Rogen and Rose Byrne, the neighbours they get are the Delta Psi Beta fraternity which is led by seniors Zac Efron and Dave Franco.

After some initial pleasantries (and a few magic mushrooms), the constantly high decibel count and partying cause the battle lines to be drawn as they both try to win the fight for the street.

Rogen may once again be playing a schlub punching well above his weight with a beautiful partner but his chemistry with Byrne and sells the relationship.

On the other side of the fence, Zac Efron delivers his best performance to date as Teddy. Looking like "someone a gay man designed in a lab", Efron is charasmatic, displays a hint of danger and great comic timing. He could well be in line for a Channing Tatum-sized push into the comedy mainstream.

The laughs come as thick and fast as sambuca shots at a frat party as the pranks escalate from calling the cops to hiding airbags, and dividing and conquering by forcing the frat boys to "ho's before bro's".

These neighbours are a lot of fun but there is genuine heart underneath and you will be happy to move in and spend a couple of hours with.