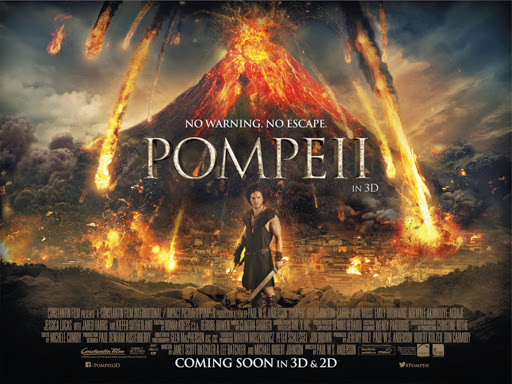 The film begins with a quote from Pliny the Younger:

"You could hear women moaning, children howling and men shouting. They were crying out... Some were lamenting their own misfortune... A few in fear of death were praying for death..."

Was it about Pompeii on that fateful day or the experience of watching it on the big screen directed by Paul W.S. Anderson?

Because this film provokes an eruption of negativity that covers any potential audiences in a molten lava-esque sea of wooden acting, terrible dialogue, one-dimensional characters and two dimensional 3D.

Apparently it took three people to rewrite the screenplay for Titanic replacing the iceberg with a volcano and adding in some scenes from Gladiator for good measure.

So in the first half of the movie in which we are forced to sit through the "plot and character development" before the molten lava hits the fan, we see "you know nothing Jon Snow" Kit Harington's Milo; a poor, penniless Celt who saw his parents killed by Romans and forced to become a gladiator slave, go to Pompeii to fight for his freedom. Here he meets upper class girl Cassia, and they fall in love. The only problem is, besides the big f*ck off volcano, is that she is being forced into marriage with a rather slimy individual with an evil man servant. Sound familiar?

The slimy Senator Corvus (Kiefer Sutherland), who just happened to have killed Milo's parents (and not aged in 20 years), then turns up to watch the scene from Gladiator where they recreate a famous battle but the slaves forget to read the script.

Before Ridley Scott can sue for copyright infringement the volcano blows up and we get a replay of the second half of Dante's Peak... or should that be Dante's Inferno?

Go ahead Pompeii, magma day. What's that? oh, you can't. Why? Because this film is anything but tremor-endous. There is no cinder-ella story to be found here, no seismic shift in opinion and there Etna stopping the number of puns I can work into this final paragraph because ash much as you would like me to stop, jokes like this are just the Teutonic.

Is it possible to find anything in the film to help big up Pompeii?