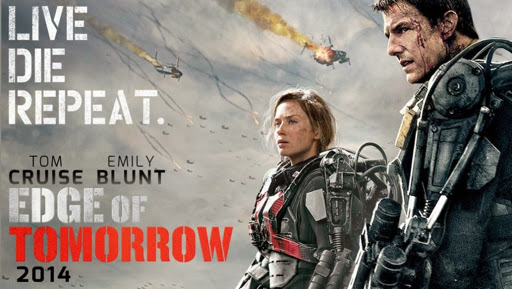 By the end of the first act of Edge Of Tomorrow, it is clear that it isn't your typical Tom Cruise movie as it has him dying on the beach at Normandy with an alien's blood eating through his face.

Suddenly we snap back to earlier that day when Cruise wakes up again in Army custody being sent to the front line for the final battle against an alien invasion.

Stuck in a Groundhog D-Day-style time loop he is forced to relive the same day over and over again every time he dies.

It gives Cruise one of his best roles in recent years, with a character arc that sees him change from a weasely, Army PR man with a shit-eating grin to battle-hardened warrior.

After going through the five stages of grief/loss upon reliving the same situation again and again: Denial, Anger, Bargaining, Depression, Acceptance, he works towards a Phil Connors-style redemption and seeks to have the perfect day and defeat the enemy and break the cycle.

Surely this can't fit into the Tom Cruise plot device where he is a successful soldier who suffers from a crisis of confidence before the love of a beautiful women teaches him that he can be a great soldier again...

While he doesn't start off as a great warrior (he can't even turn the safety off on his exo-suit), he discovers that the Army's most decorated soldier Rita Vrataski aka "Full Metal Bitch" previously had the same alien power and she trains him up to become a "Full Metal Jack Reacher", part of which includes one of the best training montages since Team America which revolves around Blunt repeatedly shooting Cruise in the face.

Blunt is an forceful and intimidating presence. Cold and steely to begin with before opening up the more Cruise interacts with her character.

She will inspire a lot of women to Cosplay as The Angel of Verdun and was potentially a new strong female sci-fi icon in the mould of Ripley and Sarah Connor. Personally I would have just liked to see a bit more of her in action to provide evidence of her legendary fighting skills.

Edge Of Tomorrow is up there with Scott Pilgrim Vs The World as the best movie based on video games only they are not based on actual video games.

It unfolds like an incredibly difficult third person platform shooter that doesn't have the benefit of auto-save points. One mistake can cost you your life and you get zapped back to the start where you have to do it all over again from the very beginning.

Like a video game it can get frustrating and repetitive to begin with but it handles it with great pace and humour, particularly the interactions with Bill Paxton's gruff Sergeant Farell.

Soon advancing through the game becomes like muscle memory (Cruise and Blunt talk through the battle time and time again choreographing their movements) and you breeze through it in no time until you come up to a new section you need to master.

Each new section comes with its own challenges and the screenplay plays nicely with the audience and characters. Is this the first time they have been here or not?

Like Tom's previous venture into science fiction Oblivion, this films wears its influence on the sleeves of its exo-suits with echoes of Starship Troopers, Aliens and Source Code.

Yet unlike Oblivion, you are not constantly comparing it to the originals and it really works on its own merits right up until the end which doesn't really work with what has come before and threatens to collapse in on itself like a giant plot black hole.

If it wasn't for the misstep at the end, this really could have Edged it as the most enjoyable blockbuster of the summer. Best start over and try again!