X-Men: Days Of Future Past - review 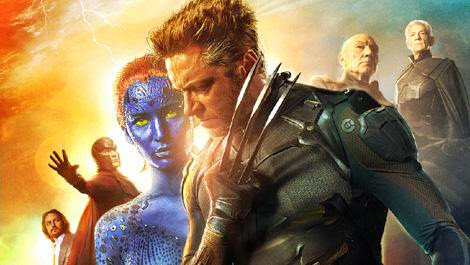 If I were to try and sum up the plot for X-Men: Days Of Future Past in one paragraph, I might say that Wolverine is sent back in time to persuade Charles Xavier and Magneto to come together to stop Mystique killing Bolivar Trask which prompts the creation of the Sentinel program which ultimately wipes out mutant kind in the future.

Follow that? No? Doesn't matter. You could try watching all the X-Men films, including the Wolverine ones, and all the end credits stings to re-familiarise yourself with the storyline and characters but it might just end up creating more questions than answers.

An action-packed opening sequence in the future which introduces us to some new and familiar faces under attack from sentinels poses such nerdy questions like "How has Wolverine got his adamantium claws back?", "How the hell is Professor X alive and looking like himself?", "Kitty Pryde has always been able to walk through walls but how can she now send people back through time?".

But before we are given time to think too hard about these questions, Bryan Singer quickly sends Wolverine back through time and presents the audience with a shot of Hugh Jackman's naked arse in order to distract us.

As much as this is the X-Men version of The Terminator storyline where someone is sent back in them to prevent the creation of robotic creatures that will wipe out an entire race, it is also paralleled with Singer's return.

Having left the franchise after X2 in order to make Superman Returns, he returns to a storyline where he uses the characters developed in First Class to retcon the universe to alter events that he wasn't happy with in X3: The Last Stand which mishandled The Dark Phoenix saga among other things, effectively giving him a clean slate to work with in the future in The Age Of Apocalypse (which I can't help but sing to the tune of Age of Aquarius).

But you can't make people excited for the future unless they enjoy the current film (take note makers of Batman V Superman: Dawn Of Justice).

Luckily this instalment is the most enjoyable since X2 from the opening attack which highlights the future sentinels and new mutants including Blink whose power of creating temporary portals is used to terrific visual effect or the sequence where Quicksilver infiltrates the Pentagon to break out Magneto with the best use of bullet-time since The Matrix.

Despite switching between the two time frames and featuring as many characters as you would find in a tweet, the main focus of the plot is the younger versions of Charles and Eric, who are further at odds than when we last saw them in First Class.

James McAvoy really gets to stretch his acting legs (pun intended) with the biggest character arc, starting as a drunk, disillusioned man who has given up his powers in exchange for the use of his legs (again not fully explained), completely uninterested in Wolverine's "future-shite" but must grow into the man who eventually becomes Patrick Stewart's calm, noble Professor X (with whom he shares a geek-tastic time-bending head-to-head).

The all-action climax helps to start reassembling the jigsaw pieces together to head towards the world already established in X-Men and X2 and it will be interesting to see if the next instalments feature the younger or older X-Men as this almost feels like a passing of the torch between casts.

An X-Cellent ensemble that successfully mutates between post-apocalyptic Sci-Fi and funky seventies blockbuster with the overall result being a bright future for the franchise.

If it was sitting an X-am, this would get a Days Of Future Pass.