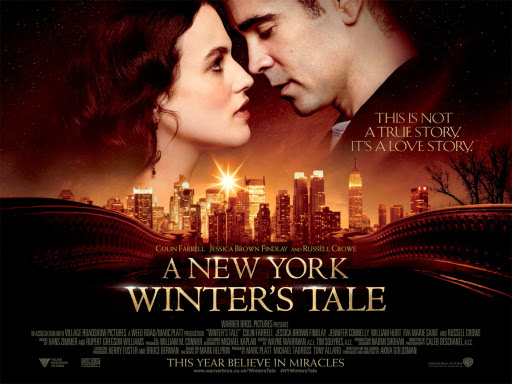 There was me thinking that there wouldn't be a worse film in 2014 than I, Frankenstein, and just a few weeks later along comes A New York Winter's Tale.

The writing was on the wall following the trailer which starts as a rather soppy tale between loveable rogue and petty thief Colin Farrell and a young red-haired girl with TB from Downton Abbey in turn of the century America. THEN he is pushed off a bridge by the incredibly Oirishly-accented Russell Crowe and we find Farrell in modern day New York and it has become a supernatural tale involving angels, demons and Jennifer Connelly.

It was difficult to know the exact moment that you have to put your hands up, admit defeat and just embrace the awfulness of a film which has been played completely straight yet comes across as utterly ridiculous and unintentionally hilarious.

It could have been when the Irish-accented Farrell's German-sounding parents are refused entry to the US as they have Consumption and think that the best chance their son has for survival as they are being shipped back to where they came from is to blindly put him off in a little wooden model boat and dump him in the water near the Statue of Liberty.

Perhaps it is when the audience is meant to believe that a 110 year old would still be allowed to be the acting editor-in-chief of a major New York newspaper in 2014.

Maybe it is when Russell Crowe's demonic thug boss talks to Lucifer (played Will Smith) who wears a Jimi Hendrix t shirt in 1914.

Is it when it is discovered that sex with Colin Farrell is fatal as the girl with TB passes away instantly afterwards?

The point when we suddenly jump forward 100 years and to show this passage of time, Colin Farrell has grown long hair and a beard and spends his time doing chalk drawings in Central Park?

No, the moment of sheer lunacy is around 20 minutes into the film when Farrell's thief escapes from a gang of thugs when he is saved by a passing white horse that then grows wings and flys them off into the distance.

It is difficult to know what could have attracted the cast to the project considering that the novel it is based on was deemed unfilmable by Martin Scorsese before first-time director Akiva Goldsman got his hands on it. The same hands that typed the screenplay for Batman and Robin.

One can only presume that Goldsman had got some serious dirt on Crowe and Smith during the filming of A Beautiful Mind and I Am Legend and blackmailed them at gunpoint onto the set. It might explain why their performances are so bad.

In William Shakespeare's A Winter's Tale there is the stage direction "Exit pursued by a bear" which becomes a running joke in The World's End. If anyone asks you if you want to watch A New York Winter's Tale, unless you are a glutton for so-bad-it's-hilarious movie punishment, simply reply "Drink up, let's Boo Boo!" *exit pursued by a flying horse*