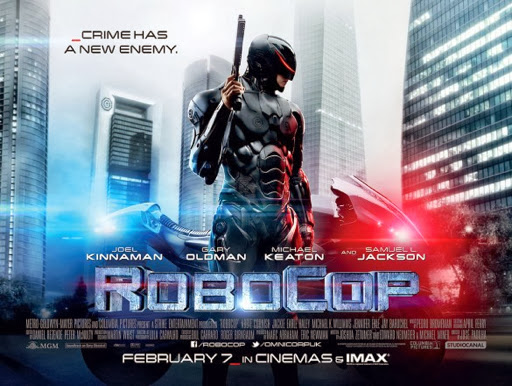 There are two things I didn't want to do when reviewing Jose Padilha's reboot/remake of Robocop:

1) Spend too much time comparing it to the original as every film deserves to be reviewed on its own merits.

2) Launch into a rant about the ridiculousness of the 12A rating that means families are taking 5-6 year olds to screenings of a film that features a rather high level of gun violence. Really?! Don't they know there is an amazing LEGO movie they could have taken them to see this weekend instead?

Detroit cop Alex Murphy is critically injured in a car bomb explosion when he gets too close to a case. Omnicorp, who specialise in overseas robotic defence contracts, step in and turn Murphy into Robocop in order to try and turn US opinion to their campaign to have their robots patrolling the streets instead of human cops.

There are several interesting themes that could be developed throughout the film; Samuel L. Jackson's political pundit Novak's critique of US policies, the replacement of human labour by machines, Detroit as a city of decay (even Omnicorp have outsourced to Asia), what does it mean to be human, etc, etc.

Yet most of this is not given the time to compute as the film's programming is quickly overridden to become a run-of-the-mill action film as Robocop hunts down the men responsible for turning him into a head and pair of lungs in a machine (really) and then turns on his creators.

Michael Keaton's Omnicorp CEO is asked at one point what a robot would feel if it killed someone. "Nothing" he replies. And that is pretty much what I felt after watching it. Nothing. As Jackie Earle Haley's Maddox remarks, "I wouldn't buy that for a dollar".