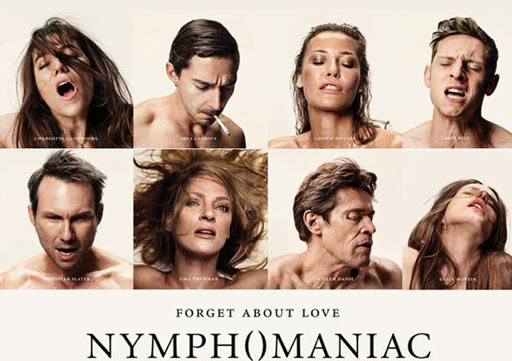 After Lars Von Trier's last cinematic outing into the world of sex ended with Charlotte Gainsbourg smashing Willem Dafoe's penis with a tree stump and cutting off her clitoris, it was with a certain amount of trepidation that I sat down for four hours of Nymphomaniac at the special One Night Stand event.

Found beaten and unconscious in an alleyway, a woman called Joe (Gainsbourg) recounts her life's sexual exploits to the sympathetic and curious ear of the kind-hearted Seligman (Stellan Skarsgard).

This framing device reminded me of The Usual Suspects and Slumdog Millionnaire, as Joe used objects from around the room to inspire her stories and Seligman would find bizarrely coincidental elements from the tales to link behavioural aspects of nymphomania to such topics as fly fishing, vocal harmonising, etc.

However Von Trier's script is self-aware enough to allow both characters to call each other on the more unbelievable aspects of their stories or observations.

The film was always going to be controversial and hardcore in terms of sex (there was an amusing silence in the audience as they watched Gainsbourg's bemused face framed between two erect penises) but it was never pornographic. As Skarsgard said during the post-film Q&A, it is not a film you can jerk off to.

What was surprising was how much of Nymphomaniac was a film you could laugh at. There was a wickedly dark sense of humour running through the story with the highlight of the film being the chapter called "Mrs. H" and featured Uma Thurman as a woman who brings her sons to young Joe's flat to show them the "whoring bed" their father had left them for.

The best chapters are "The Compleat Angler", "Mrs. H" and "The Eastern and Western Church (The Silent Duck)" and features the film's strongest performances from newcomer (pardon the pun) Stacy Martin, Thurman and Jamie Bell.

By telling her story chronologically, Volume II focuses on the grown up Joe's experiences it suffers from a lack of Stacy Martin and the continuation of Shia Labouef's woeful attempt at an English accent (I believe that was what he was going for even though for Volume I I thought he was meant to be Australian).

Plus it features the film's worst chapter "The Gun" which has little to do with sexual desire and instead becomes a generic crime story before the whole story comes to a close with a horribly misjudged ending that is not in keeping with the characters up to that point.

Ultimately Nymphomaniac is similar to many sexual encounters.
It starts off rather promisingly, there is a spark, chemistry, everyone is having a good time but soon you find yourself in uncomfortable positions before the whole affair limps to an unsatisfying climax.