Love Is In The Air - Discover Tuesdays review

Different to most of my posts, this particular review was written for the Picturehouses Discover Tuesdays notes to be distributed at the screenings. 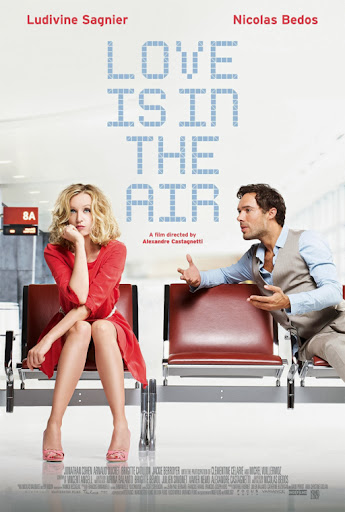 "We would like to welcome you aboard today's Discover Tuesdays film and ask that you take a few moments to read the following review as the features on this romantic comedy may differ from those you have previously watched."

Julie is returning home to her fiance and Antoine has a final job interview to get to but when they sit down next to each other in business class, it is quickly apparent that both of them have brought more than just carry-ons with them in terms of baggage on this flight from New York to Paris.

For the two of them are former lovers and the contents of their tightly packed hearts might shift during the six hour flight as old feelings are rekindled, accusations made, secrets revealed and passions ignited.

But the course of true love never runs smooth and Julie & Antoine are advised to keep their seatbelts fastened as there may be unexpected turbulence ahead.

Airing their dirty laundry in public attracts the attention of other passengers and flight crew and soon it descends into flashbacks as the two exes tell the story of how they met and ultimately parted ways.

Both characters have their flaws and are given equal opportunity to tell their side of the story which will leaves audiences torn between who is right and who is wrong in the relationship.

Antoine is a womaniser, player, bounder and a cad. He has a string of women yet no relationships until he meets Julie and is attracted to her precisely because she doesn't give in to his cliched advances (including a cheesy trip up the Eiffel Tower). Perhaps he has found the woman to tame him.

Julie is shy and retiring, prone to playing it safe in work and love but enjoys the danger and excitement of Antoine but this opens up a jealous and obsessive side to her.

The chemistry between Ludivine Sagnier (SWIMMING POOL, MESRINE) and Nicolas Bedos (POPULAIRE) is first class and the script (co-written by Bedos) really gives them a screwball comedy wit that has plenty of bite and more sparkle than the complimentary bubbly.

Director Alexandre Castagnetti has a steady hand in the pilot’s seat, ensuring a fast smooth ride throughout the film before the third act starts its final descent towards Hollywood rom-com formula with echoes of AN AFFAIR TO REMEMBER and in a nice reversal, features a mad dash from an airport for a declaration of love.

Arguably, no one does romance better than the French, and should the mood for love overcome you and make you feel giddy and lightheaded, oxygen masks are located above you. Just pull the mask towards you to start the supply. Please attach your own mask before helping others and note that the bag does not inflate.

So please ensure all electronic devices have been switched off, your chair is upright and in a fixed position, relax, enjoy the next 96 minutes with LOVE IS IN THE AIR and we hope to see you on board Discover Tuesdays again soon.