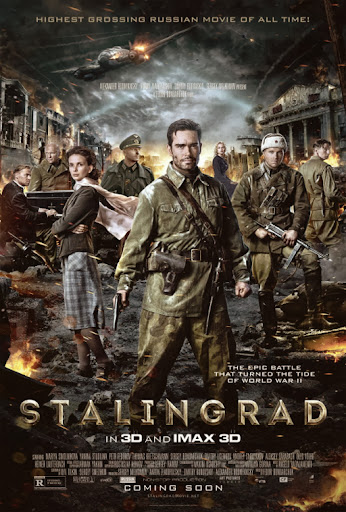 War, huh, yeah, what is it good for? Making movies that's what.

There have been some truly great films made about war. Downfall, The Thin Red Line, Apocalypse Now, Star Wars...

But until now, none of them had attempted to capture the horror of war in gut-wrenching 3D, which is exactly what Russia's first 3D and IMAX production Stalingrad has done.

Initially bemused by having the film start with a framing device of a man helping out in the aftermath of the Japanese earthquake/tsunami telling the story of his mother during WWII, we are thrown into battle scenes of an attack on the German forces by Russian soldiers which are filmed in a slo-mo, hyper-stylised way that was used in 300.

While it does offer some striking images such as soldiers on fire from destroyed oil tanks, coming over a hill to attack the Germans, it doesn't have the weight and gravity that other war films have when it comes to their battle scenes. There isn't the same harsh reality of war, with the blood and guts, pain and loss being lost amongst the CHI and green screen effects used to make the film look as good as possible (including it must be admitted very impressive 3D work).

The story focuses on one small band of soldiers who attempt to hold a pivotal location against the Germans, whilst protecting a young girl who has been living there amongst the rubble.

With it being a Russian production, it was odd to see that the main group of soldiers didn't really have much character development beyond The Leader, The Sniper, The Old Guy, The Young Guy and The Opera Singer.

The most interesting and complex character was in fact a German solider (played by the terrific Thomas Kretschmann) who had fallen in love with a Russian girl who reminded him of his wife, even though they didn't speak each others languages and she might not have felt the same way instead seeing him as an opportunity to survive the war.

As the initial OTT battle scenes give way to the quieter character-focused moments and Angelo Badalamenti's score began to soar, the film improves and becomes more than just a 3D exercise in explosions.

It's not Stalin-bad but won't join the ranks of the classic war films either.