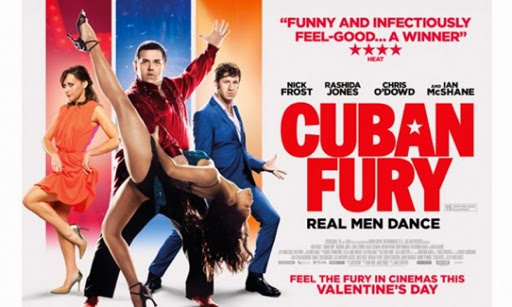 An extreme incident of bullying causes child salsa champion Bruce Garrett to pack it all in. 25 years later, a grown up, slovenly Bruce (Nick Frost) finds himself dusting off his Cuban heels in try and win the heart of his Salsa-loving boss Julia (Rashida Jones) but faces competition from office lothario Chris O'Dowd.

You can imagine this a sequel to Billy Elliot on the "what if..." he had listened to his dad and given up dancing and ended up working in a lathe manufacturing plant.

In his first real leading man role, Nick Frost goes Hot Fuzz to Hotstepper and to his credit does the majority of his fancy footwork himself and would do rather well on the next series of Strictly Come Dancing.

With many hours spent in the dance studio learning the steps, it would have been nice if as much time and effort had gone into the script as the character of Julia isn't really fleshed out beyond she's his boss, American and likes salsa. Plus there is sadly also a lack of real laughs which is surprising given Frost's involvement with most of them coming from O'Dowd doing his best 80's sleazeball douchebag impression.

There is no "Ten from Len" or even a "SEVEN!" for this comedy which has a good heart but sadly takes the odd misstep when it comes to laughs thus finding itself rather flat footed leaving us with a salsa that is sweet rather than spicy.