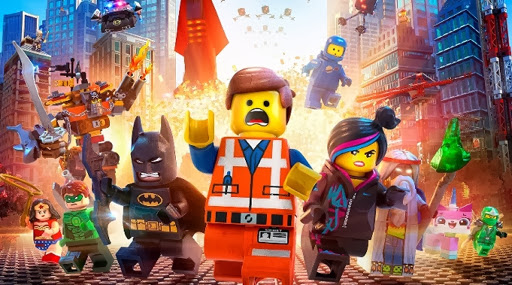 "Everything is awesome" booms the only song played in Bricksburg 24 hours hours a day and you know what? It is absolutely true.

Everything about The LEGO Movie is awesome and it is easily the most inventive and consistently funny and entertaining film of the year.

With a plot that is very similar to The Matrix, Emmet is a construction worker who lives in Bricksburg and does everything according to the instructions in order to conform and fit in as best he can. One day at work he follows a girl dressed in black, tumbles down a hole and finds a strange object called The Piece of Resistance. Introduced to a sage-like black man called Vetruvius who shows him the true world of Legoland beyond the city limits, he is hailed as "The One"... I mean "The Special" who can fulfil the prophecy and stop Lord Business from unleashing The Kragle from ending the universe as they know it.

Phil Lord and Christopher Miller are now three for three as directors of movies which sound like a potential disaster but turn out to be unexpected delights:

Cloudy With A Chance Of Meatballs - an animation about a device that turns weather into food.

21 Jump Street - an action comedy based on an 80's teen cop series.

And The LEGO Movie, a feature-length movie based on a kids toy. As Transformers has proved, it doesn't always work.

There are so many amazing and hilarious cameos and surprises in store that it would do a disservice to reveal them in the review but it is safe to say that Superman vs Batman and Ben Affleck have some way to go to beat this for a Justice League movie and best Batman since Nolan's.

An exciting blend of stop motion animation mixed with CGI, the level of detail is simply astonishing with thrilling action sequences and a multitude of background sight gags that will keep revealing more and more with multiple viewings.

This film is one of the greatest films ever assembled and suitable for ages 8-99 (that's just a suggestion) and anyone who has ever played with the sophisticated interlocking brick system, whether you went exactly by the instructions or let your imagination run wild just as Lord and Miller have here.

The only thing missing is a joke where a construction worker gets mad when another guy puts the final piece on a building he has constructed.