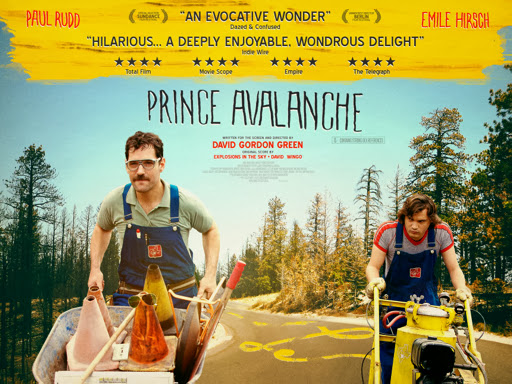 Prince Avalanche is at heart a road movie. Albeit one which involves the main characters working on the road rather than travelling it.

Alvin (Paul Rudd) and his girlfriend's loser brother Lance (Emile Hirsch) are painting yellow lines along a road through the middle of an area of Texas devastated by bushfires in 1988.

There are many song titles that could be used to describe the film: "The Long And Winding Road", "Road To Nowhere", "Highway to Hell" for example.

There is no real plot to speak of, instead we find a character driven piece where both men are forced to confront issues within themselves brought on by the isolation and solitude of the surrounding area plus the seemingly endless, monotonous task ahead.

Rudd is excellent in a rare dramatic role that still allows for the odd comedic moment as the idyllic world he has built slowly comes crumbling down as fast as an oncoming wildfire.

There might have been a point to the film but unfortunately I couldn't find it as it seemed as far off in the distance as the end of the road that the guys were painting.