Tinkerbell and the Pirate Fairy - review 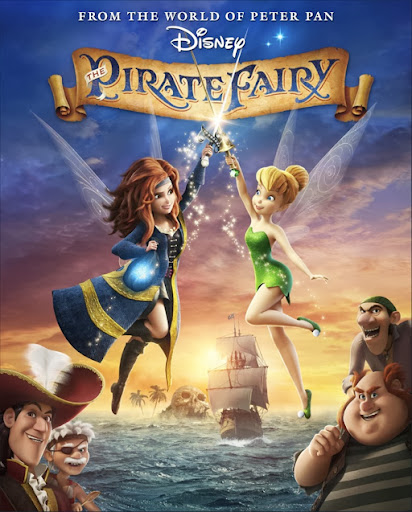 Tinkerbell And The Pirate Fairy is a film that a couple of years ago would have wound up being released straight to DVD but has flown past the second star on the right and straight on till morning and ended up in cinemas.

Why? Is it because it is like Toy Story 2 in that the quality was so good that Disney had to release it? No, it is simply because there is more money to be made by screening it in 3D to families during the half term break.

I went into this rather naive about the fact that there was a whole series of these films already out on DVD.

This film immediately kicks off in a pre-established world where there are all sorts of different types of fairies with different powers which all come from a special pixie dust, yada yada yada, desperately trying to keep up, where is Peter Pan, something about special blue dust stolen by outcast fairy Zarina who has teamed up with a ship full of pirates including a smooth young cabin boy with the voice of Tom Hiddleston... Wait, what?

Yes, the multi-talented and always busy Mr Hiddleston provides a vocal turn that quickly becomes the highlight of the film.

Even though he doesn't appear on screen, you can tell by his voice that he is enjoying himself (particularly as the story and his character develops) and he has fun smashing many buckles and it would be great to see him in this type of role in a live action film as there is something rather Errol Flynn-esque about him with a classic Hollywood charm.

Plus he manages to squeeze in a terrific Jean-Luc Picard Star Trek The Next Generation reference that I won't spoil here but will fly over the target audience's heads higher than a fairy jumped up on pixie dust.

At 78 minutes, it zips along at a fair pace and you won't be checking the tick-tock of the crocodile's clock due to a third act battle that will have kids deciding whether they would rather be a pirate or a fairy... I'll resist the temptation to make a joke here.

Nothing to lose your shadow over but there would need to be the promise of the continued development in Hiddleston's character to never say never to another trip to Neverland for this big kid.