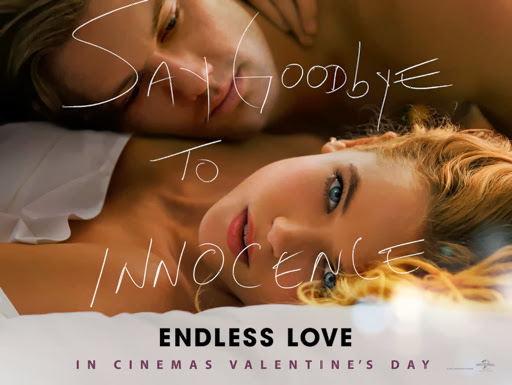 After emerging from Endless Drivel, I was amazed to discover two things.

1) That this was actually a remake of a 1981 Brooke Shields film that someone actually thought needed remaking in 2014.

2) It was not based on a book by Nicholas Sparks.

I say this because everything that happens and everything that is said is done so by people who appear to have done nothing but read the kind of soppy, romantic fiction that is epitomised by Nicholas Sparks.

At no point did I find any of the characters or what they were saying remotely believable.

We have the standard daddy's little rich girl falls in love with blue-collar guy from the wrong side of the tracks just before she's meant to go to college. Daddy doesn't approve and attempts to split them up but it only brings them closer together.

How will they possibly be able to resolve their issues? Cue a house fire (and metaphors about lives going up in smoke, flames of passion, burning bridges, etc) where the characters must decide what and who really matters.

The script features some of the most cringeworthy, eye-rolling, groan-inducing and stomach-turning dialogue I've ever had the displeasure to allow into my earholes.

"You don't fight for love. You're terrified of it" for example.

Or the scene where Alex Pettyfer delivers a speech about how he is waiting for true love which sounds like he is reading off the inside of a really bad Hallmark card.

One of the characters is played by Rhys Wakefield who was the lead antagonist in The Purge and it is easy to see that appearing in this terrible movie would lead to the desire to commit extreme acts of violence.

Thankfully the film did not live up to the title and this insipid tosh with all the romance of a first date at McDonalds was over after 105 agonisingly long minutes.