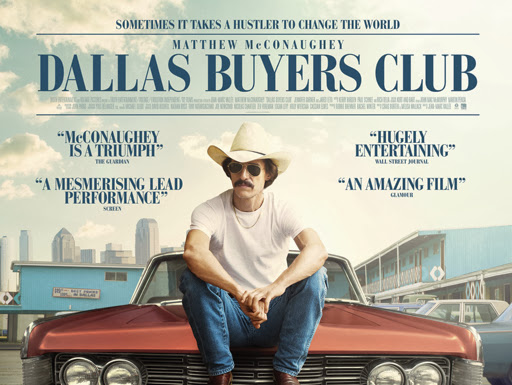 "Alright, alright, alright..." Despite becoming Dazed & Confused in a slump of romantic comedies that saw his promising career suffer a Failure To Launch, it is so satisfying and gratifying to be able to announce that The McConaissance is finally complete.

Matthew McConaughey has been the most consistently in-form actor of the last three years ever since he cured himself of the severe balance issues that affected him during his rom-com phase.

He used his smooth Southern charm to deadly effect in Killer Joe, sent up his movie and public persona in Magic Mike, became a stick in the Mud and of course took his shirt off in every single one of them.

And in a nice touch of serendipity, he could now win an Oscar for a movie in which co-star Jennifer Garner also appeared in his last rom-com Ghosts Of Girlfriends Past

Dallas Buyers Club is based on the true story of Ron Woodroof.

He is a ladies man and a "man's man" and doesn't take too kindly to being told he has been diagnosed with HIV and AIDS, launching into a homophobic rant given that at the time it was considered a gay disease.

After going through the several stages of grief (denial, anger, bargaining, depression and acceptance) including an amusing scene where a prayer to God is revealed to be at a strip club rather than a church, Ron heads south of the border to get the medicine he needs to survive but has not been approved by the FDA.

Smuggling the drugs back to the US, Ron sets up the Dallas Buyers Club, selling memberships to AIDS sufferers in exchange for the meds and reluctantly teams up (initially at first) with trans-gender Rayon (Leto) as the business expands.

The trailer hints at the film being similar to Erin Brockovich where Woodroof goes on a legal crusade to fight the FDA and get better drugs for himself and fellow sufferers but this is pushed to the background, leaving the film to focus on Ron and how he copes and changes living with the disease.

And to quote McConaughey, his motto is to "Keep Livin', L-I-V-I-N" and although he does take Jennifer Garner's compassionate doctor out on a date, "where he can feel human again", the central relationship is that between himself and Rayon.

Starting off from a position of disgust, the relationship moves to acceptance then protector and finally friendship.

Jared Leto has been busy the last ten years becoming a rock star with 30 Seconds To Mars but he hasn't lost a step, delivering an incredibly moving performance that will bring many to tears as his mask of sass and make up slowly slip to reveal the fear and hurt underneath.

McConaughey has never been better. Effectively using the entire spectrum of human emotions as he goes on this journey and finding humour where there might not have been any as he makes the most out of a bad situation. It is high praise indeed for an actor when you can't imagine any else having played the part and this is true of McConaughey and Woodroof.

It is not a perfect film. The film's tiny budget and shooting time mean that certain sequences don't have the same quality, power or pacing as others (the poor greenscreen/CGI used as Woodroof travels the world searching for a new supply sticks out like a sore thumb) but it seems silly to complain about small things like that when a movie shows this much heart and passion to tell a story.

Long may the McConaissance continue.