Out Of The Furnace - review 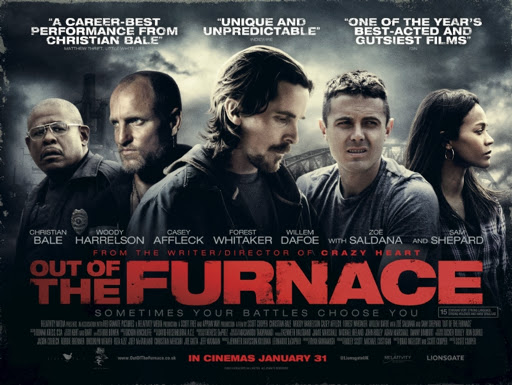 Similar to 2012's equally testosterone-filled Killing Me Softly, there is a socio-political/economic subtextual comment on America at the heart of Out Of The Furnace with bare knuckle fights and the film's final showdown taking place in old abandoned furnaces and factories. Plus it is set in 2008 around the time of Obama's election (but I'm not sure which administration the writer-director is attacking here).

Difficult to say as the plot never really chooses one particular focus as the plot takes some dubious detours along the way.

For example, Bale's character kills someone in a car accident, goes to prison and is then released all in the space of ten minutes. Why? What real effect does this have on him and others. It's not really explored as it gives way to a revenge-fuelled plot involving his war veteran brother and a dangerous hick played by Woody Harrelson in his usual Southern way even though the character is from New Jersey.

An impressive cast of actors, including another top performance from Christian Bale, give it their all but Out Of The Furnace sadly left this reviewer cold with a film that felt as empty as the abandoned furnaces they fight in.