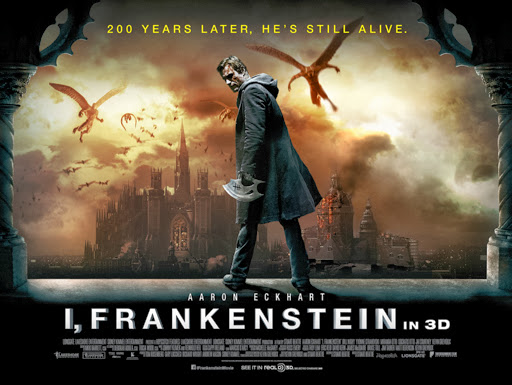 Victor Frankenstein created a being out of the parts of several humans and the result was a monster, an abomination, which he then tried to destroy.

How ironic that 200 years later, I, Frankenstein is a movie cobbled together with parts from other movies such as Van Helsing, Blade, League of Extraordinary Gentlemen and Underworld, with the end result being a complete monstrosity that the filmmakers should have tried to bury.

The only two commendable things about the film are that Eckhart's character is correctly named Adam or The Monster (the title suggested they would be calling him Frankenstein when he was not) and that the actors don't crack up with fits of laughter when explaining a plot where The Monster is caught up in an eternal war between the High Order of Gargoyles and the 666 Legions of Demons from Hell lead by Prince Naberius.

Perhaps it could have helped improve the film as it is too serious for its own good, with Eckhart delivering lines like "The Gargoyle Order must be protected" and "Descend. In Pain." like they were a sacred text.

The overall gloominess of the production is only exacerbated by the dark and dour (and completely unnecessary) 3D.

Only the ever-dependable Bill Nighy, having worked on the Underworld films, manages to strike the right tone and know just what type of film this is.

One that is a complete and total mess.

Where do you start?


Based on the critical and commercial failure of the film, it's unlikely that we'll get to see a sequel that would probably be called something like I, Frankenstein. You, Bride of Frankenstein.

All the filmmakers did was take the body of Frankenstein's Creature, put in the brain of Blade and the result is the worst film of 2014 and one that would have Mary Shelley spinning in her grave.