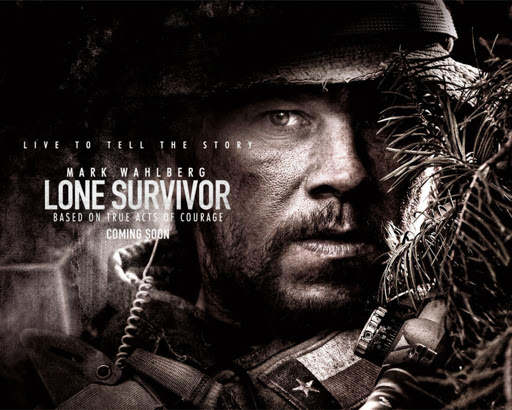 There might not be a more spoilerific film title this year than Lone Survivor and given that this is based on the true story of the failed Operation Red Wings, you might imagine exactly how this one plays out however a thrilling central shoot-out and strong performances will keep audiences engaged.

Director Peter Berg has clearly wanted to give the film as high a sense of realism as possible. For example, the film starts with a montage of US Navy Seal training and a lot of the cast members and extras are real military.

However the film begins like any other military ops movie like Black Hawk Down, complete with Eric Bana as a commanding officer, and tends to fall into cliches at times it sets up the mission and shows the camaraderie between the main players e.g. one of the guys is about to get married. Never a good sign in a war movie.

This is true US Band of Brothers stuff with bearded, buffed-up Wahlberg, Taylor Kitsch, Emile Hirsch and Ben Foster even looking like they could pass for brothers.

This "never leave a man behind", "brothers in arms" stuff might no be a concept that us Brits or non-military can ever truly understand but you really do feel and believe the bond these guys have as the mission goes south and they have to make the tough decision to "terminate the compromise" when an Afghan goat-herding family stumble upon their hiding place, or let them loose an risk alerting the Taliban.

The back-and-forth argument over the rules of engagement, with Foster pro finishing the mission and Wahlberg against killing them and ending up on CNN is a refreshing insight rarely seen in the current wave of films about the conflict and is the turning point in the film, leading to the exhilarating second act.

The subsequent firefight with the Taliban is very well shot and the audience can feel every bullet hit its target, the crack of every broken bone and will visibly wince as they experience the most realistic falling down a hill/cliff sequence ever filmed. Yes, unlike other movies, this would really hurt and leave you writhing in pain.

The ending strays a little too far into Three Kings territory and you may start to wonder how the Taliban go down like computer game characters with a straight headshot while the Navy Seals survive with multiple wounds but this could have been forgiven if not for the misjudged ending which features a terrible cover version of David Bowie's Heroes playing over images of the real soldiers.

A film which doesn't quite achieve its ultimate objective but goes down fighting.