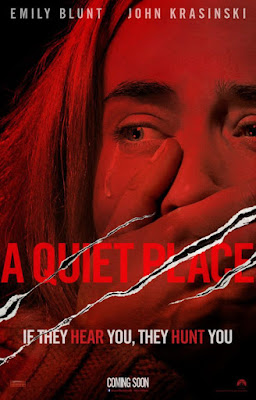 A Quiet Place is one of those genre hits that has a concept that is so simple that you will kick yourself that you didn't think of it first. Even if you did, it is unlikely that you would have delivered it so effectively as it is here and easily the best horror debut since 2015's It Follows.
In the near future, the world has been attacked by mysterious creatures that hunt by sound and kill with a fearsome ferocity. This is all set up during the opening sequence that sees a family silently raiding a supermarket for supplies before making their way home through the woods. They don't wear shoes, they talk through sign language (precipitated by their need to communicate with deaf daughter) and have made quiet paths using sand. This peace is horrifically shattered when the youngest son finds a electronic plane and it starts to make noises, resulting in a series of silent screams that will haunt your dreams.
Fast forward to a year later and the family are surviving but at what cost? They have created a life for themselves on a farm where the dad has turned it into a secure compound with security cameras, regular and danger lighting, etc and the mum has made it a home where they have dinner on leaves instead of plates and play Monopoly with cloth counters rather than metal pieces.
There is a clear bond between the family but there is also unspoken, pun intended, issues that threaten to shatter the silence. There is guilt felt by all of them over the fate of the youngest son and there is resentment on the part of the kids who feel that the father priorities keeping them alive over showing them care and affection.
This works because of the actors who are uniformly excellent both individually and together. You completely buy into the family dynamic and are emotionally invested in their safety and survival.
Of course it helps when the husband and wife team are played by real-life couple Emily Blunt and John Krasinski (who also wrote and directed the film).
Emily Blunt must love her husband a lot to do this film because Krasinski really puts her through the wringer in this as a woman who is faced with some of the most awful situations a mother can make and perfectly runs that gamut of emotions.
At 90 minutes this is an incredibly lean, tightly structured film that moves effectively from set piece to set piece and the intensity and threat increases exponentially with every moment that passes.
Krasinski wrings every drop of tension, terror and suspense out of the premise, going so far as to zoom in on an exposed nail on a step that threatens to bring their whole existence crashing down around them.
Just when you think life couldn't get any more complicated for them, a plot point that has wisely been concealed from the trailers provides a glimmer of hope for the future but also the film's most nerve shredding, knuckle whitening sequence.
The monsters are wisely kept to the shadows for the first two acts before finally coming face to face with their victims in the third act, showing off their horrifying, slightly Demigorgon-esque design.
Just as scary as the monsters is the eerie sense of quiet during the film and the credit must go to the sound design team, seamlessly moving from a natural quiet to complete silence when viewing the action from the perspective of the deaf daughter Regan (played by real life deaf actress Millicent Simmonds). Similarly, Marco Beltrami's score is used sparingly but effectively.
Speaking of which, this reviewer has never experienced a Friday night horror crowd that as silent as the movie. So caught up in the concept that it felt as if they were as frightened to make a sound as the characters in case the monsters came for them.
In A Quiet Place, silence is not only golden, it's survival. However it is safe to say that audiences and critics won't stay silent after watching it and this will turn into the breakout horror film of the year.