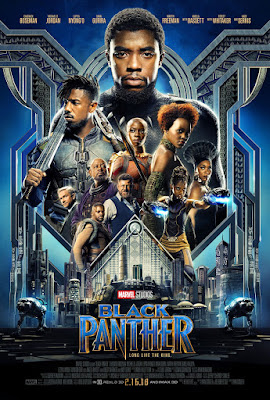 First thing's first. No Soul Stone here in Wakanda. Just a ton of Vibranium waiting to be turned into a shield or thousands of murder bots. All the Marvel fans were wrong. It isn't there. The teaser for Infinity War showing the massive battle in Wakanda wrong footed us all. It's not the Soul Stone they are protecting but Vision and his Mind Stone.
So where is the Soul Stone? Who cares, for now it is time to discuss the highest grossing superhero film in US history, Black Panther.
For a film that comes directly before Avengers Infinity War, it is surprisingly self-contained and features very few references to the wider Marvel Cinematic Universe beyond the return of the two "Tolkein" white guys Everett Ross and Ulysses Klaue (Martin Freeman and Andy Serkis).
I was slightly indifferent to the film first time round, and you can read that full review here.
Rewatching on the Road to Infinity War, it has improved in some areas but there remain some rather large flaws. Particularly in the final act.
The first half of the film remains very strong as it plays out like a Bond movie with T'Challa as Bond, sister Shuri as Q, with Okoye and Nakia as anything but Bond girls. The entire Busan sequence is the standout highlight of the movie.
Once the action returns to Wakanda and Killmonger has made his play for the throne, that's where things get a little bit... The Lion King.
Think about it. A son mourning the death of his father is usurped to the throne by a treacherous, vindictive relative who believes they should be King. Following a period of self-discovery that involves speaking with his dead dad, returns to fight and claim the throne that is rightfully his. Accompanied by M'Bakku and Ross aka Timon and Pumba.
Joking aside, the final battle is where the film lets itself down. The CGI is not as sharp as other MCU films and the face off between T'Challa and Erik in their Panther suits on a rail track looks like a deleted scene out of Tron Legacy.
There is also the bizarre moment that a war rhino stops charging when Okoye steps in front of it. This plot point was not mentioned previously but it also is exactly the same as a moment involving Elton John of all people in Kingsman 2.
It is a shame that it doesn't nail the landing because the relationship between the once and future kings is fascinating and has parallels to Martin Luther King and Malcolm X (and also Professor X and Magneto). They both ultimately have the same goal but want to achieve it in very different ways.
Still, the performances are fantastic and while Jordan's charisma and swagger threatens to overshadow Boseman, there is purpose to it in uniting some of the Wakandan tribes to his cause, and leads to his powerful speech about how death is better than bondage.
While certainly not a perfect film, the foundations for the Black Panther franchise and place within the MCU are as strong as vibranium.