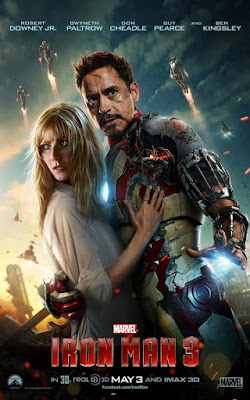 The Avengers had opened to $200 million in its first weekend. It would go on to make over $1.5 billion worldwide.
It would be safe to say that Marvel Studios were feeling pretty pleased with themselves at this point. Yet instead of resting on their laurels and sticking to a tried and tested formula, they very riskily and daringly threw out the rule book with Iron Man 3 and hired Shane Black to write and direct.
Shane Black was best known for being a screenwriter in the Eighties, cranking out the screenplays for such hits as Lethal Weapon, The Last Boy Scout and The Long Kiss Goodnight, but it was Kiss Kiss Bang Bang that landed him the job with Marvel.
His hilarious neo-noir directorial debut in 2005 based on his own script was the film that offered Robert Downey Jr a way back into the Hollywood elite and it was his performance in this film that persuaded Feige et all to give him a chance as Tony Stark. One he has seized with both hands and never looked back.
For any fans of Shane Black, it is clear that this has his fingerprints all over it; flashbacks, voiceover narration, whipsmart dialogue and it is set at Christmas!
It felt fresh, daring and dangerous compared to everything that Marvel had produced before. This took Tony Stark out of the Iron Man suit and forced him to show that he could be a hero in his own right.
Of course, the most controversial, and divisive, moment comes at the start of the third act when it is revealed that the villainous terrorist The Mandarin is actually a drunken, out of work British actor called Trevor Slattery, portraying a character created to take the blame for Guy Pearce's experiments gone wrong.
The twist works because The Mandarin is a racist stereotype from the Sixties and it would have been met with controversy if they had gone down that route, and it works because of Ben Kingsley, sorry Sir Ben Kingsley's performance. He is suitably menacing as the face of the Ten Rings and also hilarious as Trevor Slattery.
It sets the bar high for Phase 2 in that anything can happen. Well except the death of Iron Man that is. I mean, you have him making this potentially huge sacrifice play at the end of The Avengers but it lacked the emotional weight due to the fact that Iron Man 3 had already been announced.
Looking back at the Marvel Cinematic Universe now during Phase 2, there is so much happening within a tight time frame that this leads to some odd story choices which impact repeat viewings of some of the films. Iron Man 3 in particular.
At the end of this film, Tony Stark essentially retires as Iron Man, even going so far as to remove the arc reactor from his chest. Yet, a couple of years later, there he is back as Iron Man in Age of Ultron where Whedon seems to have ignored most of what happened to him thematically.
Still, it is difficult to be that negative about a film being narrated by Tony that you discover in the post-credit sting that is actually being told to Bruce Banner who has fallen asleep, because he is not that kind of doctor.