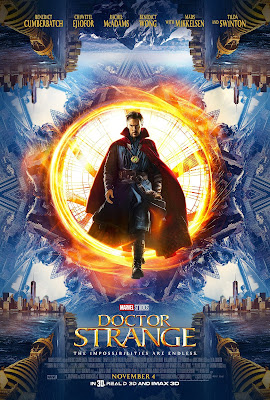 Things to take quantum leap forward in the Marvel Cinematic Universe thanks to Doctor Strange. We had previously seen travels into the Quantum Realm in Ant-Man and this film would take that to the max with multiple mystical dimensions along with a hint of magic. Or is it science? As Thor would say "I come from a world where they are one and the same."
Strange was mentioned in passing during The Winter Soldier but it took another four films before he would make an appearance. Why? It could be argued that his powers were too great to be involved in the Civil War fight as he could have easily influenced the final outcome with a quick spin on the Eye of Agamotto.
Instead, Mister Doctor is given an origin story set some time during the increasingly confused MCU timeline (but one that ends synced up to the events in Thor Ragnarok).
In terms of plot, this is the most straightforward origin tale that Marvel has done since the original Iron Man.
Benedict Cumberbatch is well cast as the pompous, over-opinionated surgeon and he plays it as though he is doing an impression of Hugh Laurie doing his House accent. Following an accident in which he loses the use of his hands, he travels to Nepal in search of answers on how to heal himself and that is where he finds Kamar-Taj and the Ancient One (Oscar winner Tilda Swinton).
One of the first things that is noticeable about the film is the cast list. Cumberbatch, Swinton, Ejifor, Mikkelsen, McAdams. It reads more like an Oscar contender than a superhero blockbuster and it is to Marvel's credit that they are now in a position to attract this calibre of talent for lead and supporting roles.
So while the plot might be straightforward, the visuals are anything but. Twisty, turny and dizzying to the point that it feels like if Inception had labyrinthitis, they are unique within the MCU and make for a welcome (and by this point needed) change to the formula). Beyond Strange's first trippy, er, trip into the Quantum realm that borders on the horrific, it is the Manhattan sequence that is the stand out.
Thankfully, the mirror realm allows the wizards to fight without causing any destruction or death to the people of New York (goodness knows they've been through enough!).
And it was nice to see a novel twist on the third act climax with having Strange stuck in a Groundhog Day-style time loop being killed over and over again by the big bad Dormmamu until he agrees to bargain. Was a nice change to having the hero solve the problem with their fists.