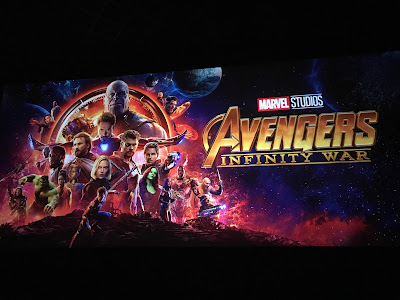 Tonight saw the Avengers: Infinity War press tour come to Edinburgh. Albeit in a more low key (or Loki) fashion than the London UK Fan Event this past Sunday.
Rumours had been flying around that Paul Bettany (Vision) and Elizabeth Olsen (Scarlet Witch) would be in Edinburgh for the screening sadly proved to be false but co-director Joe Russo was on hand to introduce the footage. 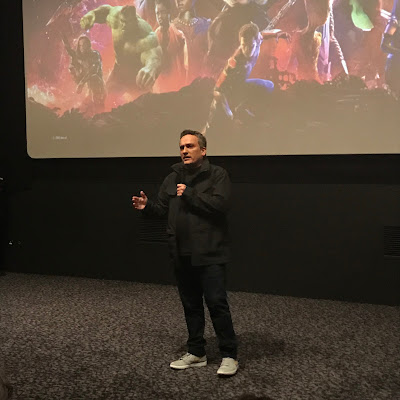 He started by recognising the efforts of Mae Trumata who had started an online petition to have the UK premiere of the film in Edinburgh as it was the only place that they filmed in outside of the US and spent 5 weeks shooting on location at Waverley Station and the Royal Mile.
They even built a makeshift film studio in a hanger at Leith Docks for interior shoots while they were here, bringing in $10 million to the local economy.
Russo indicated that the support for the petition was why he was there tonight, and wanted to give something back to the city “for being such incredible hosts to my brother and I and our crew. It was an amazing shoot here”.
He had to go on to apologise because Edinburgh did not appear in the footage that was being screened to the audience (*cue near riots - kidding*) but that Edinburgh would feature in the finished film and that audiences “will see about ten minutes of your beautiful city in the film, which is shot as Edinburgh - it’s not shot as another location and some pretty important sequences happen here.”
That sequence is likely to Scarlet Witch and Vision come under attack from the Black Order before being saved by Captain America… if the trailers are to be believed!
Russo teed up the footage by saying that it was two scenes coming just after the opening of the film that did not give too much away in terms of plot and action. There is only one premiere screening happening for Infinity War to cut down on potential spoilers as there are “so many secrets in this film” and they “don’t want to spoil it for anyone”.
“We have gone to great lengths to protect what happens in the movie, we wrote fake scripts and distributed them to the cast”
As for the footage that was screened… you are not getting spoilers here. You would have more chance of getting blood from an Infinity Stone!
However it is fair to say that Infinity War is in very safe hands with the Russo Brothers following Captain America The Winter Soldier and Captain America Civil War and the result will be suitably epic.
While the event might not have had the star power of the London screening, the fans left happy as Joe Russo happily chatted away with fans, posing for photos and autographs. He even arranged a second showing of the footage to fans who had initially missed out on the event. 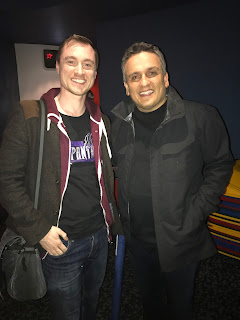 Suffice to say that Edinburgh and Scottish Marvel fans will be assembling at their local cinemas come April 26th to see how the culmination of the first ten years of the Marvel Cinematic Universe plays out.
Posted by Dallas King at 14:13