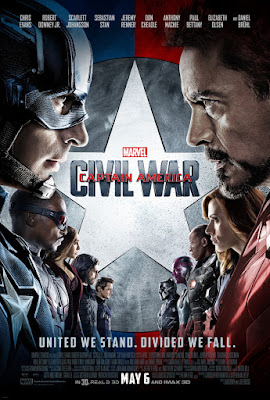 Phase 3 kicked off in style with the stealth Avengers film Captain America: Civil War aka Avengers 2.5.
Admittedly there were a few worries going into the film that this was simply going to be an Avengers ensemble film rather than a Captain America film. The Russo brothers however managed to find a way to distil the story about the breakdown of the Avengers to actually further Steve Rogers' story by making the Jenga piece that threatens to topple the whole be James Sebastian Barnes aka The Winter Soldier.
Inspired by Mark Millar's game-changing comic series that crossed over many of Marvel's titles at the time, heavily influencing future storylines, it focused on the issue of a Superhero registration act that would force heroes to reveal their secret identities and become government employees.
As this was not an issue in the MCU due to the fact that most of the heroes were not hiding their identities, the storyline had to be adapted to fit in with the movie universe.
Following the events of Age of Ultron, the Avengers find themselves subjected to legislation called the Sokovia Accords. This would make them answerable to the United Nations, something that Tony agrees with but Steve refuses to sign. The battle lines are drawn between the Avengers as everyone has a different opinion on whether or not it is a good thing. Something which in particular affects Scarlet Witch and Vision's relationship which sets things up nicely for further exploration in Infinity War.
Just as the Accords are due to be passed, Bucky Barnes bombs the UN causing the death of Wakanda's King T'Chakka. This introduces audiences to the character of Black Panther in the form of his son Prince T'Challa (Chadwick Boseman). He desires revenge and goes after Barnes but Rogers sets out to protect his friend, unwilling to believe he was behind the bombing.
Upon his capture, which sees the reintroduction of Steve Rogers' beard... no, not the one in Infinity War, Sharon Carter of course, the Winter Soldier is released by a man called Zemo (Bruhl) using a HYDRA mind control technique.
In order to solve the mystery and bring his friend back, Captain America cuts ties with the Avengers, putting him on a collision course with Stark. Something that will cause all the heroes to pick a side and lead to the MCU's most iconic and fantastic scene: the Superhero Smackdown.
This was the scene that Marvel fans had dreamed of ever since Nick Fury turned up at the end of Iron Man. The chance to find out the answers to the geeky questions like "who would win in a fight? Falcon or War Machine? Ant-Man or Spider-Man?
Yes, just one of the reasons that Civil War is so good is that it is the film that brought Spider-Man into the MCU and boy does he make a great first impression. Tom Holland is perfect as the young teenage Peter Parker and he gets some wonderful moments, particularly with Cap, Falcon and Bucky.
Every character gets their moment to shine but it is Paul Rudd's Ant-Man who steals the show here with his transformation into Giant Man. When Ant-Man was first released I thought that he would transform when returning from the Quantum Realm and burst through the house but they wisely saved it for this and it was completely worth it.
It isn't just the fight at the airport but every action sequence that cemented the Russo brothers as the kings of the Marvel castle. Even going so far as to take a page out of the Marvel TV series playbook and include a fight in a corridor and stairwell.
Ultimately, the film comes down to Cap vs Iron Man as the scheme that Zemo has been plotting turns out to be a more twisted revenge tale than Oldboy as it is revealed that Barnes was the one responsible for killing Stark's parents. This results in the most emotional fight so far (even more so than Thor vs Loki) and one that puts the final nail in the coffin of the Avengers as Steve chooses Bucky over Tony "I'm sorry, Tony but he's my friend", "So was I".
Will we see the old team back together in Infinity War, only time will tell.

Fun fact: Hawkeye calls Tony "The Futurist" which is the name of the album that Robert Downey Jr released in 2004.