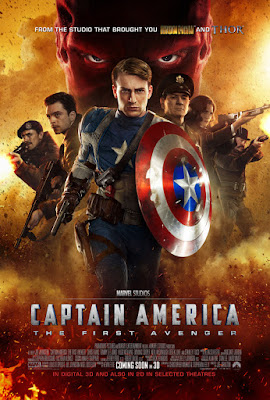 From tales of Norse Gods and visiting the Nine Realms in Thor, the Marvel Cinematic Universe then followed that up with... a period action film set in World War II?
Yes, it was time to introduce the face and poster boy for Marvel since 1942... Steve Rogers aka Captain America.
And who did they get to portray the Star Spangled Man with a plan? Well, the Human Torch of course.
At this point, Chris Evans (no, not that one) was most famous for starring in Fantastic Four. 7 years on, it is hard to imagine anyone else carrying the shield... well maybe, Bucky or Falcon (if you read the comics).
Powered by a terrific cast including Tommy Lee Jones, Hugo Weaving, Toby Jones, Stanley Tucci, etc, director Joe Johnston proved the perfect choice for the tale, having previously delivered a perfect slice of retro charm with The Rocketeer. He even manages to throw in a reference to his work on Raiders Of The Lost Ark when the Red Skull gains possession of The Tesseract and quips that "Hitler digs for trinkets in the desert".
The CGI still holds up well in the early scenes with "tiny" Steve before the super serum and Evans does a great job at showing Rogers' pure heart and determination ("I could do this all day").
The origin of "Captain America" gifts the MCU with one of its all-time greatest moments, the Star Spangled Man with a Plan musical number, and its finest leading lady in the form of Peggy Carter.
Hayley Atwell is a match for Steve in terms of wits, guts and style and gets her moments to shine. The only times she comes across as the "love interest" is when she reaches across and touches his chest post-serum and during the Armageddon-Aerosmith style radio message at the end.
Their relationship is what gives the movie its heart and leaves the audience with a heartbreaking denouement before setting us up for The Avengers (somewhat disappointingly with a mini-trailer for the film rather than a standard post-credit sting).

Infinity Stone Counter = 1 (The Space Stone aka The Tesseract)
Posted by Dallas King at 01:00