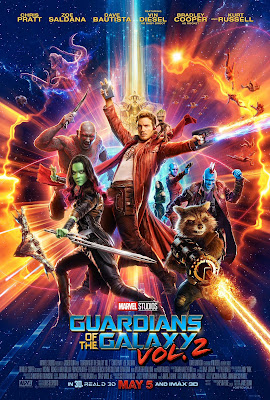 Controversial opinion it may be but you know what? I'll just come out and say it.
Guardians Of The Galaxy Vol. 2 is better than Guardians Of The Galaxy.
While it might not have the shock and surprise factor of the original (in that "Wow, this is actually really good"), Vol. 2 is a much richer, deeper, more emotional film that's true focus is not some scheme to wipe out all life in the universe (well it slightly is).
The film begins the most enjoyable title sequence of any Marvel movie as Baby Groot dances to ELO's Mr Blue Sky and the Guardians battle a giant space monster behind him. Actually come to think about, it, is it the only Marvel title sequence? They don't usually have any credits until the end of the film do they?
Anyway, the fight to protect some Anthrax batteries for the Sovereign race is merely a Macguffin to lead to the real story. Similar to an episode of Family Guy where the first ten minutes of the episode are just set up for another story.
And that story is, as Vin Diesel mentions every ten minutes or so in all of the Fast & Furious movies, "Family".
It is about the relationships between a father and a son, a surrogate father and a son and between two "sisters".
Following on from the events of Vol. 1 where Star Lord Peter Quill discovered that his father was not of Earth, his father Ego The Living Planet comes looking for his son after hearing of a human who "held an infinity stone in his hand and didn't die".
The face of the Living Planet takes the form of the "rugged good looks" of Kurt Russell which harks back to the Eighties as he was one of the decades most iconic heroes in the likes of The Thing, Escape From New York and Big Trouble In Little China and he brings all of that swagger and charisma to the role and is a perfect fit for Peter's father.
Having found him, Ego wants to show Peter his true potential as part-Celestial being. He takes Peter, Gamora and Drax off to his planet, leaving Rocket to repair their ship and babysit Groot and Nebula. But he'll have problems of his own when the Ravagers return with Yondu looking for payback.
Vol. 2 plays out a bit like a Greatest Hits mix tape compiled by Peter's Mom.
On the A side, if you liked the 80s references from the first film, don't worry there are plenty more here. Enjoy the surprise MVP of Vol. 1 Drax the Destroyer? He gets more time to shine and develop in this one. And once again, Gunn has picked the perfect song list to go with the story. Who doesn't spend the next two days after seeing this singing Brandy?
Flip the tape over to the B side however and as expressed earlier, the film is a very deep, emotional family tale.
Gamora and Nebula attempt to work through their issues by doing what any sisters would do. Try to kill each other of course! This manifests in an unexpected but wonderful North by Northwest homage that leads into a proper scrap with some excellent work from Karen Gillan, relishing the increased screen time.
Of course, the main plot is Chris Pratt working through his daddy issues. Early on he tells Gamora he wished he could have played catch with his dad and told the kids at school his real father was David Hasselhoff and both of these references come back later on in surprising ways. When Ego's ultimate plan for Peter is unveiled, it is up to Yondu to float in Mary Poppins style to help save the day.
If Batista was Vol. 1's MVP, then Michael Rooker is certainly the MVP of Vol. 2. He has worked with James Gunn on a number of projects but he delivers his finest work with this performance.
I was not expecting the climax of the film to have the emotional sucker punch that it did.
*Spoilers ahead*
From the moment Yondu sacrifices himself to save Peter with the line "He may of been your father boy, but he wasn't your daddy", to Peter's realisation that he has lost two father figures, to the Ravager funeral... 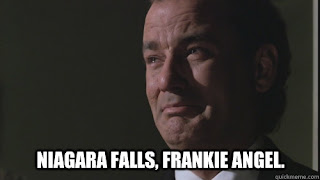 The new line up of the Guardians confirmed at the end of the film, adding Mantis and a now surly, teenage Groot, there is nothing but excitement to see how they interact with "Earth's mightiest heroes" as all the different plot threads come together for Infinity War.