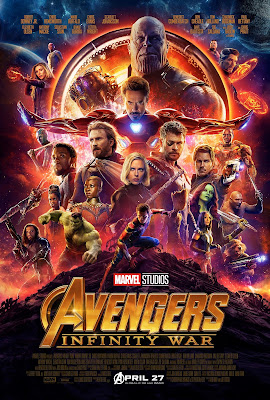 Let’s make one thing perfectly clear right off the bat. Avengers Infinity War is not just a movie. This is an event. This is the season finale of a ten year, nineteen episode comic book series that was merely the twinkle in Kevin Feige’s eye back in 2008.
Disregard what the internet memes say. This *IS* the most ambitious film event of all-time. Nothing else even comes close.

Expectations are higher than they were for another fandom 19 years ago for The Phantom Menace. But can they possibly be met?
Will it work as a film in its own right and will it work as the culmination of everything that has come before it.
The answer, Marvel fans will be happy to here... is YES.
As for the “story so far”, or “previously on Avengers Infinity War”, it would take Luis from Ant-Man’s motor mouth to take the audience on a abridged history of the MCU in five minutes to get everyone up to speed so let’s just get down to brass tacks.
Thanos, the big purple dude who has been sitting on his giant space toilet (Empire magazine’s words, not mine) since The Avengers has finally decided to claim the six Infinity Stones required to complete his Infinity Gauntlet (3 years after first claiming he would “do it myself” back at the end of Age Of Ultron). This puts him on a collision course with the Asgardians (The Tesseract), the Guardians of the Galaxy (who know where the Power and Reality stones are) and Earth’s mightiest heroes with whom the Mind and Time stones currently reside.
Straight away, from the first scene and his introduction, it is clear that this is Thanos's movie. Immediately establishing as a credible threat and the toughest challenge the Avengers have ever faced. Trust me, there will no longer be jokes about him sitting on his space toilet after this. He is built like a brick space sh*t house and knows how to throw a punch and he certainly has the stones (if you'll pardon the pun) to lay the preverbial smackdown on our beloved heroes.
Josh Brolin, pulling double comic book duty this Summer, proves the perfect choice for the Titan-ic villain. Enhanced by some stunning CGI work, he is simulataneously physically imposing, viciously cruel but also singular in his vision. As all zealots, he believes that his course of action is the correct one, no matter the cost to himself, his family or the universe.
The movie's central narrative thrust follows Thanos on his quest and it turns out to be the correct move on the part of the Russo brothers and writers Christopher Markus and Stephen McFeely. By making Thanos the main protagonist of the story, it allows the filmmakers to delicately keep all the different plates spinning around him. And boy are there a lot of plates. There are 14 main characters who have had their name in the title of a movie, along with dozens more who make up various iterations of the Avenger rosters.
The Russo's split their cast into teams, each with a plot thread relating to a different Infinity Stone, providing some unexpected pairings that the audience wouldn't have realised they needed until now.
Following the events of Civil War, Steve Rogers (no longer Captain America) has stuck close to fellow fugitives Black Widow and Falcon who take a jaunt to Edinburgh, Scotland to rescue Scarlet Witch and Vision, who has a literal target on his forehead.
Thor, who has shown in Ragnarok that he can mine chemistry and comedy out of any pairing, teams up with Rocket Raccoon and Groot while the rest of the Guardians travel to Knowhere as Gamora's relationship to her "father" comes to the fore.
Finally back on Earth, Doctor Strange and Tony Stark battle for the position of Alpha Male with a goatee, and constantly chastise Peter Parker for his "really old" pop culture references.
Despite the over abundance of characters, every single one gets a moment to shine either with a quip or action beat. Although given the runtime, it leaves you wanting more from them all and some plot threads are left dangling, and maybe will still exist in the form of deleted scenes on the DVD i.e. Natasha and Bruce's relationship now he's returned.
The narrative switches back and forth between the groups organically so that the audience are always aware of who is where and how Thanos's plan is advancing before the various roads to Infinity War converge on Titan (Thanos's home planet) and Wakanda for the final showdown(s).
The trailers have thankfully given away very little of the main action sequences and they definitely deliver on an epic scale unlike anything seen in the Marvel Cinematic Universe before.
It is a cliche in superhero movies that no one ever really dies or stays dead but right from the off, the Russo's put all their chips on the table and tell the audience that all bets are off in terms of who is walking (or flying) out alive of this battle. There is a palpable level of fear and danger every time a hero goes one-on-one with Brolin's Titan, who towers over them in the same way Dwayne The Rock Johnson towers over Kevin Hart.
No more plot details will be discussed because despite all the theorising and speculating, it goes places you simply could not have predicted and thus is best enjoyed spoiler-free.
Avengers Infinity War is the event movie to end all event movies and where possible should be seen with an audience of hardcore fans. The ones at the midnight screening were invested in every single second. Resulting in bouts of laughter, squeals of joy, shocked gasps, shedded tears and moments of pure, stunned silence... and in Scotland, cheers for a sign in a window that read "We will deep fry your kebab"!
Just like someone holding a complete Infinity Gauntlet, the Marvel Cinematic Universe is virtually unstoppable at this point and Avengers Infinity War is their finest hour so far... but one expects as a time stone would tell, the best is yet to come.